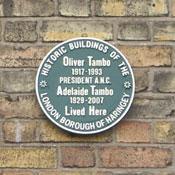 Between 2007 and 2010, Haringey Council ran its own historic plaques scheme to commemorate notable or famous local former residents. Haringey’s Green Plaques Scheme was similar to the Blue Plaques Scheme run by English Heritage.

The Green Plaques have provided posterity for some of Haringey’s famous people and given knowledge for local residents or anyone with a historical interest in this part of London.

The idea for a local plaques scheme came from the Muswell Hill and Fortis Green Residents' Association, who provided support in initiating and establishing the Scheme in 2005. The first plaque was unveiled on 3 October 2007.

To be awarded a plaque, candidates had to meet the following criteria:

In assessing each case, it was necessary to:

Green Plaques in the borough

Historical Green Plaques were erected in Haringey for:

William Barlow (1845-1934) - Fellow of the Royal Society, crystallographer and mineralogist who deduced that there are just 230 different kinds of symmetry arrangements which form the basis for crystal structures, known as 'space groups'. He lived at 74 to 80 Muswell Hill Broadway, Muswell Hill, N10. (Plaque unveiled on 3 October 2007) 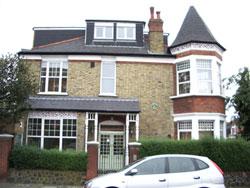 William Heath Robinson (1872-1944) - artist, illustrator and cartoonist known as ‘the Gadget King’ unparalleled as a practitioner of the comic image portraying perversely logical contraptions that gently mocked the products of the industrial age. He lived at 25 Southwood Avenue, Highgate, N6. (Plaque unveiled on 28 January 2008) 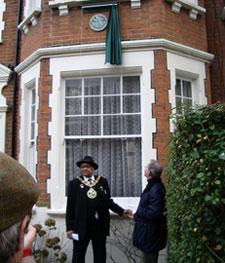 Priscilla Wakefield (1751-1832) - Quaker author who wrote a number of travel and science books for children and was actively involved in the abolition of slavery and prison reform. She was a founder of the Lying-in Charity for Women and the Penny Savings Bank. She lived in Ship Inn Yard near High Cross United Reform Church, 310 High Road, Tottenham, N15. (Plaque unveiled on 2nd May 2008)

William Bernhardt Tegetmeier (1816-1912) - naturalist, published authority on poultry, beekeeper who discovered how bees created the hexagon shaped cells in their hives, and racing pigeon pioneer. He was a founder of the Savage Club and a writer and journalist of domestic science who corresponded with and aided Charles Darwin with his studies. He lived at 101 St James's Lane, Muswell Hill, N10. (Plaque unveiled on 5 September 2008) 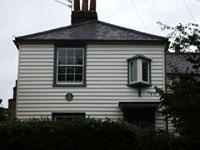 Coventry Kersey Dighton Patmore (1823-1896) - artist, scientist and poet best known for "The Angel in the House", but his best work is found in the volume of odes called "The Unknown Eros". He was also a critic, essayist and follower of the Pre-Raphaelite Brotherhood. He was assistant librarian in the British Museum for 19 years, during which he was instrumental in starting the Volunteer movement. He lived at Highwood Lodge, 85 Fortis Green, N2. (Plaque unveiled on 10 December 2009) 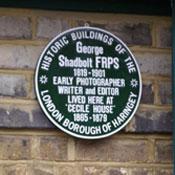 George Shadbolt (1819-1901) - Fellow of the Royal Photographic Society, early photographer and student of optics with a strong interest in innovative techniques including micro-photography, photographic enlargement, compound and combination printing and stereoscopic angles. He was a writer and editor of the "Liverpool and Manchester Journal" (subsequently the "British Journal of Photography"). He lived at Cecile House, 104 Crouch Hill, N8. (Plaque unveiled on 24 February 2010)

John Alfred Prestwich (1874-1952) - inventor and designer of engines, also well known for his creation of cinematography, working with S.Z.Ferranti and the cinema pioneer William Friese-Greene to produce cameras, mutoscopes, cutting and perforation machines and projectors. He designed his first motorcycle engine in 1901, made the first overhead-valve V-twin in 1906 and patented a desmodromic valve in 1923. The engines were used in many famous motorcycle marques and speedway bikes, early aeroplanes, chainsaws, cultivators and light rail maintenance trucks. He founded the J.A.P. Engineering Company at 1A Lansdowne Road N17. (Plaque unveiled on 19 March 2010)

Walter James MacQueen-Pope (1888-1960) - theatrical manager, historian and publicist. He gained much experience as business manager of West End theatres including the Queen's, Globe, 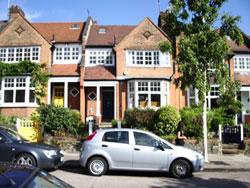 Lyric, Royal Opera House and Drury Lane. He became manager of Alexandra Palace between 1922 and 1925 when he supervised restoration works to the theatre and arranged magnificent entertainments, shows and concerts in the Park. He then became a theatre publicist and during the Second World War did the publicity for the whole of the ENSA organisation. His theatrical history books include "Pillars of Drury Lane" and "The Melodies Linger on, The Story of Music Hall". He lived at 33 Etheldene Avenue, N10. (Plaque unveiled on 30 June 2010)

John Eliot Howard (1807-1892) - Fellow of the Royal Society, pharmaceutical chemist who was honoured and acclaimed for his study of, and scientific publications relating to, the bark of the Peruvian cinchona tree and the extraction of its derivative, quinine, as a treatment against malaria and other fevers. Its use soon became popular, usually as a constituent of 'Indian tonic water' taken alone or more frequently with gin. He also founded the Brook Street Brethren Chapel off Tottenham High Road. He lived at "Lord's Meade" formerly partly on the site of 1 Lordsmead Road, N17. (Plaque unveiled on 3 August 2010) 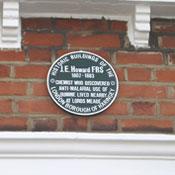 David Greig (1865-1952) - founder of the chain of grocers and later supermarkets. The first store was opened in 1888 and by the 1960s there were more than 160 stores across the south of England. He was also a notable philanthropist, leaving trusts for the benefit of Hornsey and the community, which have contributed to the Greig City Academy in Hornsey. The plaque can be found above the shopfront at No. 32 Hornsey High Street. This was his mother's shop (then known as 3 St Mary's Terrace, opened in 1870) where he lived and learnt the grocery business. (Plaque unveiled on 15 September 2010.)

All of the Green Plaques were unveiled in a short ceremony attended by interested parties.

Other plaques around the borough

For other plaques, monuments and memorials commemorating individuals from or associated with Haringey, see BHH365 Changemakers: Plaques and Monuments and also War Memorials.

You can also see the London Remembers website (external link), that includes a selection of memorials and plaques from around the borough.

Our Women's History Maps for Tottenham, Hornsey and Wood Green also commemorates and provides information for over 250 women who once lived or worked in the area.