Haringey can be proud of the number of public plaques, statues and monuments commemorating, celebrating and acknowledging named individuals who have lived in and contributed to our community here in the borough. Those honoured and remembered include:

Nicola Adams OBE is Britain’s most successful female boxer of all time. At the London 2012 Olympic Games she became an icon after winning this country’s first ever female boxing Gold medal, a feat she repeated in 2016 in Rio de Janeiro. In the run up to the London Games, Nicola trained at Haringey Boxing Club (external link). In 2013, Sustrans (external link) created a Portrait Bench sculpture in Downhills Park, Tottenham which includes a steel sculptural portrait of Nicola. 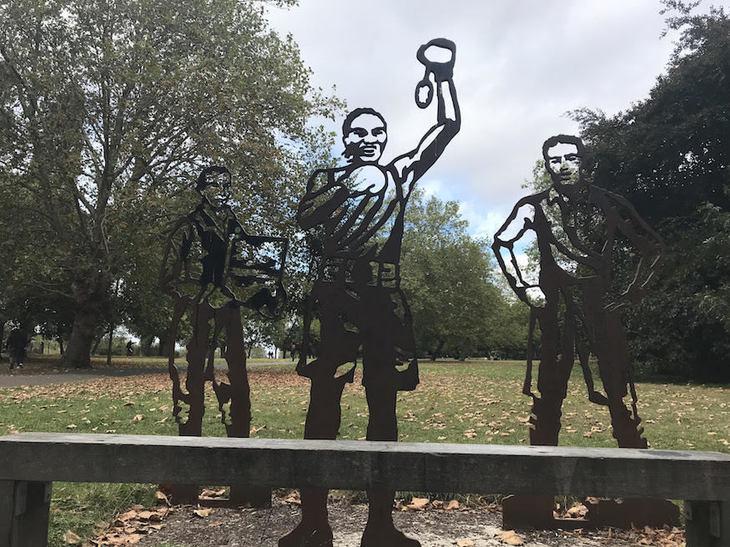 Emma Clarke was a pioneering British footballer, considered to be the first known black women's footballer in Britain. A Nubian Jak Blue Plaque (external link) was unveiled at Campsbourne School, in Nightingale Lane, Hornsey in December 2019 (external link) to honour Emma, her sister Jane (who also played for the team), and the rest of the British Ladies Football Team of 1895. That year was when the women took part in the first women's football match between North London and South London, played in Crouch End near Nightingale Lane.

Born in Archway and growing up in Stroud Green, Laurie Cunningham (external link), was an English professional footballer. In 1977, while playing for West Brom, he became the first black footballer to represent an England international team organised by the Football Association. He later earned 6 caps for the full national team between 1979 and 1980, becoming one of the first ever black England internationals. He was the very first English footballer to play for Real Madrid in Spain.

Tragically, Laurie was killed in a car crash at the age of 33 in Spain in 1989. In 2016 an English Heritage Blue Plaque (external link) was erected on his childhood home at 73 Lancaster Road in Stroud Green.

In 2013, a plaque and portrait dedicated to one of the most important figures in black history was dedicated at Marcus Garvey Library in Tottenham Green. Local resident and artist Everall Hall had donated his painting of the Jamaican black rights campaigner Marcus Garvey (1887 - 1940) (external link) in 2010. The memorial plaque was unveiled by Jamaican High Commissioner Aloun Ndombet-Assamba (external link).

The Chad Gordon Autism Campus in Waltheof Gardens on the Tower Gardens Estate in Tottenham is named after Chad Gordon, a local adult with autism who was tragically murdered in May 2020. At the opening a tree was planted and a commemorative plaque was unveiled in Chad's memory a year after his death, with his family in attendance. The dedicated campus is ground-breaking in its bespoke approach to providing for autistic adults and for the range of services.

In 1978 Bernie Grant was elected as a Council Member for the London Borough of Haringey. By 1985 he had been elected Leader, becoming the first black leader of a local authority in the UK. Bernie was elected as a Member of Parliament for Tottenham in 1987, retaining his seat until his untimely death in 2000. Through his work with trade unions, grass-roots communities and in local, national and international politics, Bernie continuously campaigned for social and racial justice, was an anti-apartheid campaigner and an outspoken supporter of minority and disability rights and gender equality. 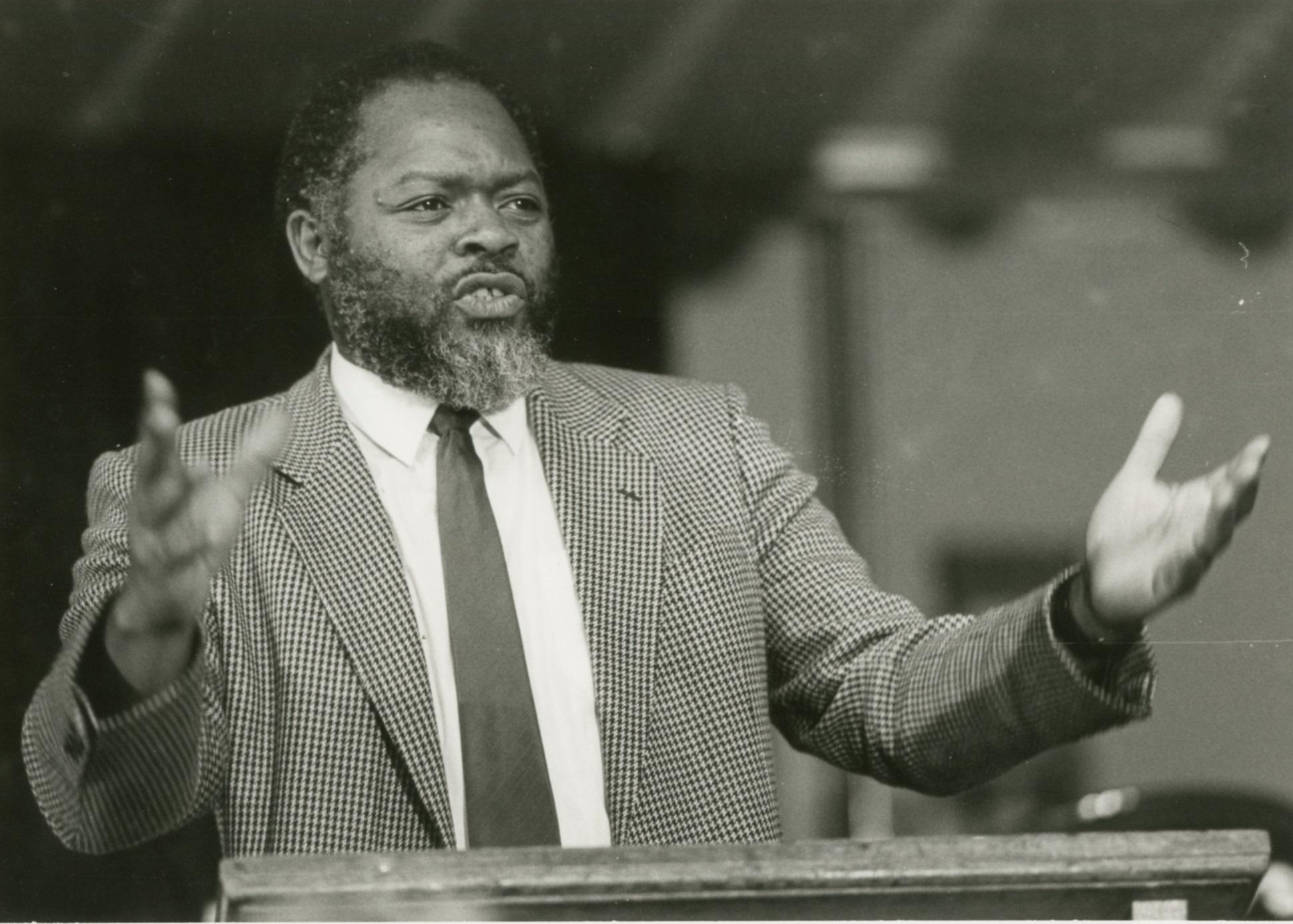 Cyril Ewart Lionel Grant (external link) was a Guyanese actor, musician, writer and poet. Having served as one of the first set of RAF officers from the West Indies during the Second World War, he qualified as a barrister but then worked as an actor and singer. During the 1950s, Cy became the first black person to be featured regularly on television in the UK.

He was well-known as the voice of the character Lieutenant Green in the television series 'Captain Scarlet and The Mysterons'. Cy Grant lived in Highgate with his family for over 50 years. In November 2017, a Nubian Jak Blue Plaque was unveiled on his home at 54 Jacksons Lane, N6 (external link).

Symbol of the Community. The plaque honours the memory of Cynthia Jarrett (external link). Her tragic death in her Tottenham home sparked outrage amongst the community in 1985 at the conduct of the police. Her memorial can be found outside the former Tottenham Town Hall, Town Hall Approach, N15.

Prominent anti-apartheid activist, political exile, Adelaide Tambo (external link) was regarded as a hero of the liberation struggle against apartheid in South Africa. In 1960 she was exiled with her husband Oliver Tambo in London, and they came to live in Muswell Hill. A Haringey Historical Green Plaque commemorating both Adelaide and Oliver was dedicated to them in 2007, the year when she died.

Former President of the African National Congress (ANC), Oliver Tambo and his wife Adelaide fled South Africa's apartheid government and were exiled, coming to London in 1960. They lived for over 20 years at 51 Alexandra Park Road, Muswell Hill. A Haringey Historical Green Plaque was unveiled on their home in 2007. The same year, a sculptural portrait bronze bust of Oliver Tambo by sculptor Ian Walters (1930-2006) was set up in his memory at the local park - at that time called Albert Road Recreation Ground - not far from the Tambo's former home. A second statue was dedicated in honour of Oliver Tambo at a ceremony in the park on 27 October 2019, overseen by Oliver's daughter Her Excellency Thembi Tambo, the South African High Commissioner to the UK. On 9 February 2021, Albert Road Recreation Ground was renamed O. R. Tambo Recreation Ground in honour of the world-renowned South African anti-apartheid campaigner.

In October 2014, a Nubian Jak Blue Plaque (external link) was unveiled in Tottenham in honour of Walter Tull. The plaque is located at 77 Northumberland Park, on the site where Walter once lived in 'digs between 1909-1912. During this time Walter made his name playing as a professional footballer for Tottenham Hotspur Football Club. Walter was the first black outfielder to play in the English Premier League.

During the First World War, Walter joined to fight with fellow Spurs players in one of the Pal's Football Battalions of the Middlesex Regiment. Despite it being illegal at that time for a black man to be an army officer, Walter was a pioneer becoming the first black British army officer in this country. He died in 1918 in action in the Somme. He has no known grave and is commemorated on the Arras War Memorial in France (external link).

A 19th century gravestone in St Mary's church graveyard in Hornsey commemorates the life of Jacob Walker who died in 1841. His gravestone is a rare memorial in this country. It tells us he was born into slavery in America, but when he came to live in England, where slavery was illegal, Jacob was a faithful servant. The remarkable story of Jacob's life can be read on the Historic England site (external link). In 2007, his grave was designated Grade II by Historic England (external link).

West Green Road in Tottenham was the place where Lincoln 'Len' Dyke and Dudley Dryden established their business in 1965. They were joined by Tony Wade as a business partner in 1968. Their company Dyke & Dryden pioneered Britain's black haircare and cosmetic industry, laying the groundwork for black enterprise. The business became Britain's first multi-million pound company run by black entrepreneurs, with products sold across the UK and exported internationally. A Nubian Jak Community Trust Black Plaque (external link) was unveiled above the shop at 126a West Green Road on 13 November 2020 (external link), as part of a project to recognise significant black figures in British history and to celebrate the legacy of these three pioneering businessman.

A granite statue was unveiled on 10 September 2021 at the Whittington Hospital (external link), dedicated to the Windrush and Commonwealth midwives and nurses of the NHS who came to the UK between 1948 to 1973. The statue represents a stylised nurse and was commissioned following a 3-year fundraising campaign. Black heritage organisation Nubian Jak spearheaded the campaign, in collaboration with the Whittington Health NHS Trust and both Haringey Council and Islington Council.

The artwork 'Redefining Haringey' is a series of three enamel plaques on copper by the artist and visual orator Akosua Bambara to commemorate Haringey's observance of the Bi-centennial Anniversary of the Abolition of the Slave Trade Act 1807-2007. This artwork was commissioned in 2007 by the Friends of Bruce Castle for Bruce Castle Museum & Archive. It was supported by a legacy grant from the Equalities Team, Haringey Council to mark the Bi-centennial Commemorative year of the Abolition of the British Slave Trade in 2007.

The artwork was unveiled by Elder Claudius Fanusie (external link) at an event for the UNESCO International Day for Remembrance of the Slave Trade and its Abolition (external link) on Friday 22nd August 2008. It is on permanent display at Bruce Castle Museum.

The year 1998 was the 50th anniversary of the arrival of the passenger ship HMT Empire Windrush in the UK. On 23 June 1998, a rose garden and plaque in West Green, Tottenham was officially opened (external link). It was dedicated in honour of the 'Peoples from the Caribbean who have settled in Haringey.'

In 2018 on the occasion of the 70th anniversary, marking National Windrush Day, two rose bushes were planted alongside the memorial. 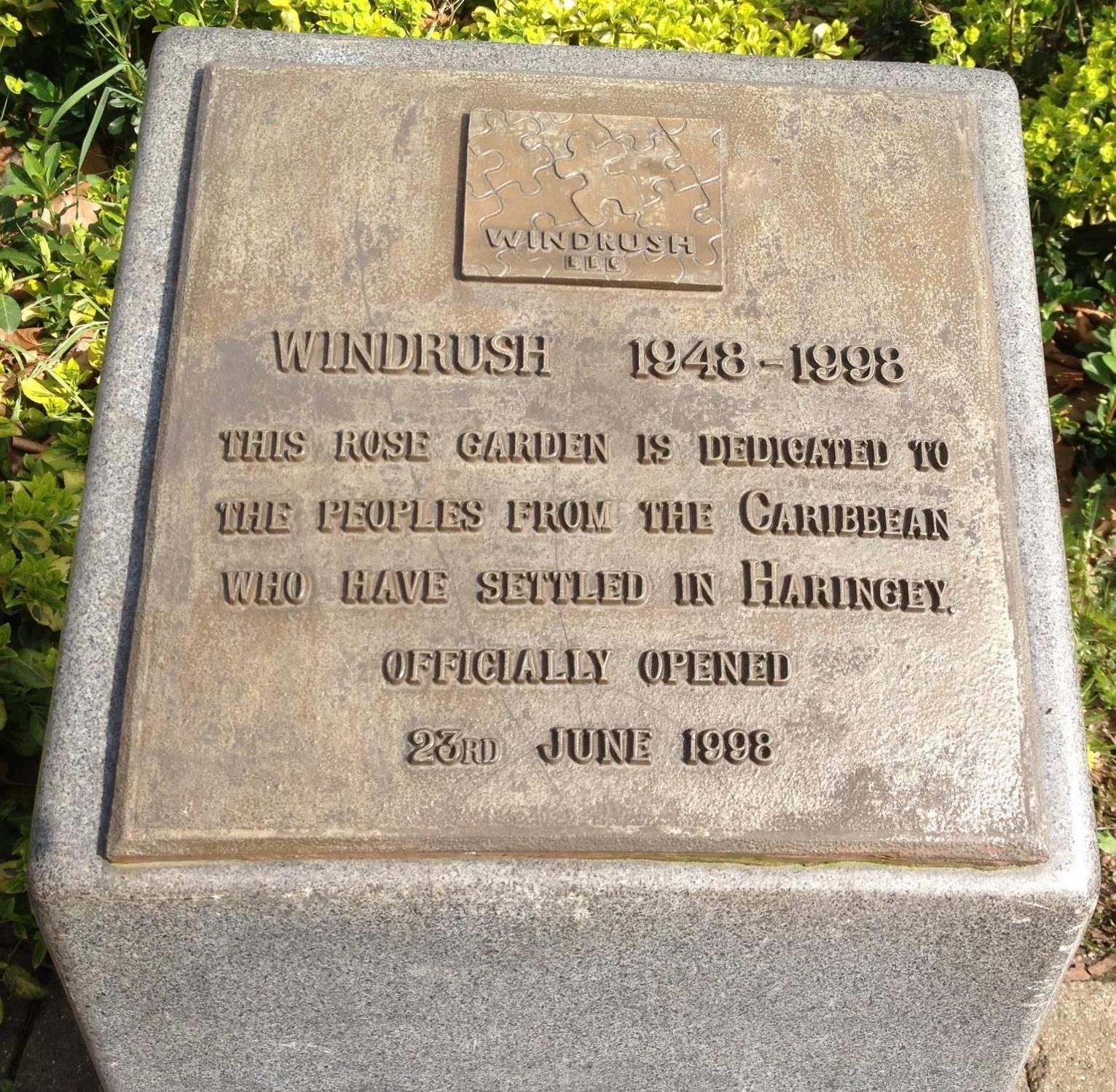