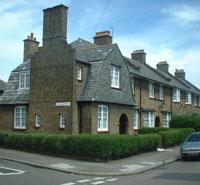 Tower Gardens in the White Hart Lane is our own ‘Garden City’ in Haringey.

Before 1909 planning was covered by local bye-laws only and was chaotic.

Greenbelt and ‘zoning’ developed and wide avenues containing public and shopping spaces, including allotment gardens which helped to bridge the gap between town and country.

The Arts and Crafts Movement

Search for authentic styles in the 19th century, a reaction to machine production. Promoted idea that art and craft were the same thing and that decorative arts are not higher than applied arts.

Legal Protection of the Estate’s Character