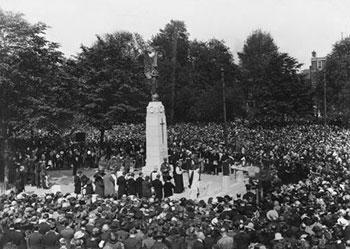 2014 marked one hundred years since the outbreak of the First World War (1914-1918). The war claimed the lives of over 16 million people across the globe. It changed the world for everyone.

One hundred years may have passed, yet we can still make connections to the First World War - through our own family history, the heritage of our communities locally or in other countries, and the long-term impact on society and the world we live in today.

Centenary commemorations took place over a four year period from 2014 to 2018. Across the world, nations, communities and individuals of all ages have begun to come together to commemorate the lives of those who lived, fought and died in the First World War.

Certificate Demonstrating the Unity of the Allies 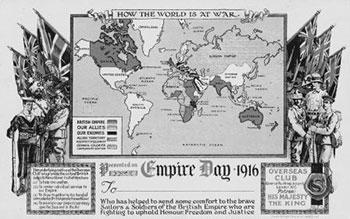 Between 2014-2018, we remembered not only local people who served and died in the Great War but also how life changed for everyone on the Home Front – from everyday life of growing food on allotments, to the changing role of women in the workforce and the contribution of our diverse communities to the war effort in this country and elsewhere.

Hidden histories about the local peace movement and the significant number of conscientious objectors have been some of the stories that have been told. We reflected on the life of Walter Tull, the first black officer in the British army, who had previously played for Tottenham Hotspur. We considered the transformation of Alexandra Palace as a transit camp for Belgian Refugees; becoming an internment camp for German Civilian Internees in 1915, as well as former industries in Tottenham such as Harris Lebus, the furniture manufacturer, turning to munitions work in support of the war effort.

In Haringey from 2014 there was an ongoing programme of events, talks, walks, plays, exhibitions and projects for all ages, to remember the people affected by the Great War and to highlight how the conflict was a catalyst for huge social and economic change in our communities. The programme was delivered at various locations around the borough, to include Bruce Castle Museum and Haringey Archive, Alexandra Palace, the libraries, parks, schools and community spaces - with different groups and organisations.

Here are some examples of projects, events and exhibitions from around Haringey reflecting on the First World War:

Private Ectos Maffuniades from Tottenham (known as 'Muffins' to his pals) 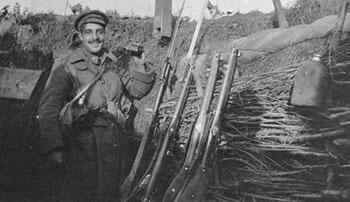 This event gave an overview of some projects and events for the commemorations of the First World War from 2014 onwards, with advice on funding and volunteering opportunities – there was a short and very informative talk by Deborah Hedgecock and others including historian John Hinshelwood.

Tottenham Hotspur FC team before the War. Walter Tull is seated second from the right in the second row.

A Reading of ‘Tull’

The play illustrates the remarkable life of a man who overcame personal tragedy and racism as a footballer and soldier. 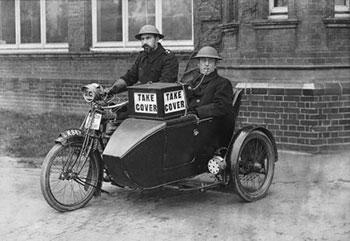 The experiences of COs, the way the law operated, the reasons why many felt it wrong to fight the war - and the consequences of their actions. 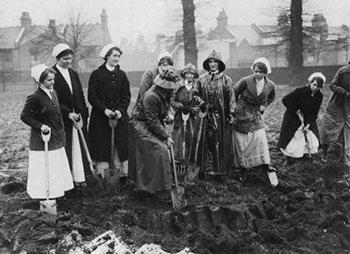 Nurses at the Prince of Wales Hospital, Tottenham dig up the land to grow much needed food

Talk: On Parade: Identifying Uniforms from the First World War

A brilliant talk by Robert Fleming, National Army Museum in which he explained how you can work from photographic clues and uniforms to uncover WW1 histories. 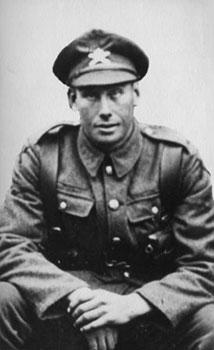 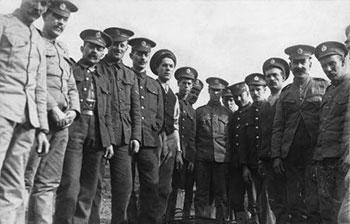 Postcard displaying a photograph of Lew Wilkins and his comrades, sent to his sister in Harringay

Tottenham Quakers (external link) held a Vigil in commemoration of the 16,000 British Conscientious Objectors of WW1. In the Quaker tradition, the vigil consisted of silent remembrance, interspersed with readings of texts and poems. There was a particular tribute to Tottenham's 100 Conscientious Objectors and the families and peace networks which supported them. 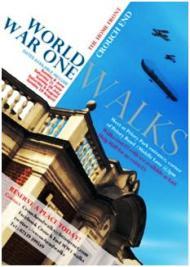 Guided walks looking at life here at home, while fathers, husbands and sons were away at the Front.

This series of guided walks drew on local sources including research by the Hornsey Historical Society.

Guides Oonagh Gay and Paul Sinclair trained at the University of Westminster and have both been resident in Crouch End for many years.

Participants met on the corner of Middle Lane and Hornsey High Street (just inside Priory Park) and took part on the 90 minute walk, finishing at the Earl Haig Memorial Hall, Elder Avenue N8, for a First World War-themed tea.

A play presented by Tottenham Theatre. Written by Phil Vasili, Tull was first performed at the Octagon Theatre, Bolton in 2013 to considerable acclaim.

It told the inspiring story of Tottenham Hotspur Football Club's first black player Walter Tull, who volunteered to join the British army at the outbreak of the war.

Having demonstrated his leadership skills, Walter Tull was commissioned as an officer, contrary to British military law at the time concerning black men. Sadly Tull did not survive the war. He was killed at the second Battle of the Somme, aged 29.

With workshops for local young people throughout the year, the Tottenham Theatre Company (external link) is funded by the Heritage Lottery Fund.

A series of performances took place across Haringey.

A commemorative event to honour those who died in both world wars; with an information display, a café and a tea dance. Organised by Friends of Lordship Rec (external link).

A memorial sculpture was unveiled near the place where 43 local people were killed by a direct hit on the air-raid shelter. The site is now a woodland that is managed by the Friends of Lordship Rec.

An evening talk by local historian and lecturer Jim Lewis, who brought together for the first time many little-known stories of how science and the innovative technological local industry along the Lea Valley made such a huge contribution to the outcome of the First World War.

Supported by the Friends of Bruce Castle.

During World War I, an army private is accused of desertion during battle. The officer assigned to defend him at his court-martial finds out there is more to the case than meets the eye. Directed by Joseph Losey and starring Dirk Bogarde and Tom Courtney. 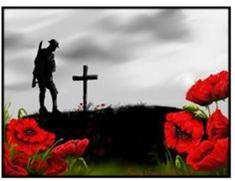 A chance to reflect on the First World War by listening to poems and two short talks:

Illustrated Talk: The World is my Country

Emily Johns and Gabriel Carlyle of Peace News presented the subject of Movements and People (not just Conscientious Objectors) who opposed the war. The event was co-organised by Tottenham Quakers (external link) and Haringey CND.  Download a copy of the flyer (PDF 4MB) 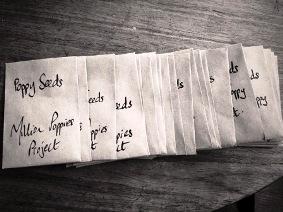 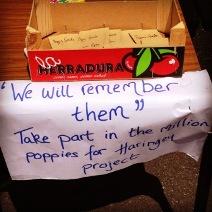 The poppy provided splashes of red on a landscape, where nothing else was growing in the aftermath of complete devastation; a reminder of lives tragically lost, it is hugely symbolic.

Harringay Remembers (external link) is a dedicated website by volunteers from St. Paul’s Church in Harringay, N4 which gives access to information from this period, drawn from its parish records. The church played a central local role during the war and its research reflects the lives of the wider community of Harringay. 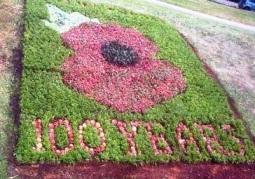 To commemorate 100 years since the Great War, the design of a poppy formed the central focus of a commemorative floral bed at Haringey Civic Centre. Designed and planted by staff of Haringey Parks Service and Wolves Lane Nursery in June 2014.

This exhibition marked the centenary of the beginning of the First World War. 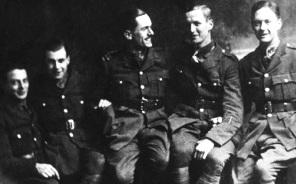 The war claimed the lives of over 16 million people across the globe and changed the world for everyone. Today we can still make connections to the tragic events of the First World War through our own family history, the heritage of our communities locally or in other countries, and by the long-term impact on the world we live in today. The war affected the families and friends of the residents of Haringey in different ways, from the home front to the front-line in the trenches in this country and abroad. 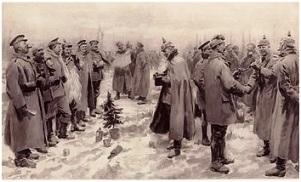 Held at Bruce Castle Museum by History On The Move (external link). 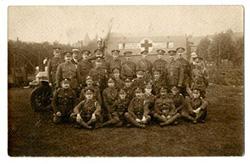 An exhibition on local soldiers who died in WW1 and were commemorated on the Boards of the Hornsey Local War Memorial Chapel at the Park Road Health Centre, N8. A page of information on each soldier showed where they lived, along with other Hornsey wartime information.

An illustrated talk was followed by a short period of reflection to remember those who died, took place on 4 August 2014.

To mark the centenary of the start of WW1, Oonagh Gay, a local badged guide of Crouch End walks, talked about the impact of the First World War on our local Haringey community.

“The lamps are going out all over Europe, we shall not see them lit again in our lifetime.“

Exactly 100 years later, supporting the 14-18NOW and Royal British Legion’s Lights Out campaign, Haringey residents were invited to join thousands of others around the country in turning off the lights and lighting a candle between 10pm and 11pm on Monday 4 August, to mark the exact hour that war broke out and to join together in a national moment of reflection.

See the following websites for more information about the Lights Out campaign:

When Green Lanes said "No" to War 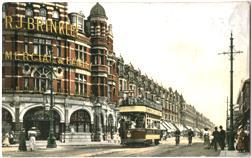 A re-enactment of the anti-war meeting (PDF, 461KB) held outside The Salisbury Hotel Public House took place on Tuesday 5 August 2104. 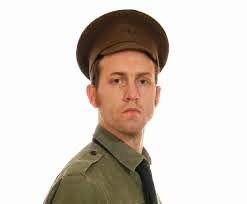 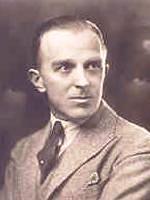 Musical comedy from 1929. Made eleven years after the end of the war, the film stars Nelson Waite Keys (picture above) and is based on the story of the founding of the Splinters concert party in 1915 in wartime France, by soldiers serving in the British Army on the Western Front.

Haringey libraries displayed enlargements of the Royal Mail’s commemorative stamps that were issued to mark the centenary of this conflict. The stamps were first displayed at Hornsey Library in August 2014. They then moved to: Alexandra Park Library in September.

The six stamps pictured above are the first set in a special series to be released over the next five years. They feature striking imagery of memorials, artefacts and portraits relevant to the beginning of the conflict, in addition to newly commissioned artwork.

One stamp features Private William Cecil “Billie” Tickle. He was only 15 years old when he signed up, convincing recruiting officers that he was 18. He lived with his family in Hornsey and joined the Essex Regiment in September 1914. Private 13510 Tickle was killed in a charge against German lines at Ovillers in 1916. Like many others, his body was never traced. Just a few days earlier his photograph was sent home to his mother (featured above). 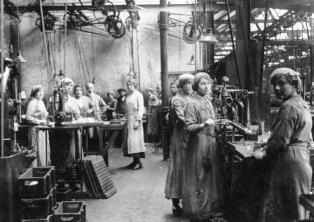 Deborah Hedgecock, the Curator of Bruce Castle Museum led an informative walk along our streets that harbour memories of war-time commitment, courage, fortitude and sacrifice.

Event was supported by The Friends of Bruce Castle. 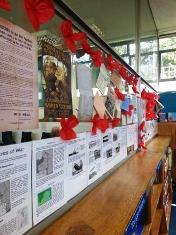 Themed Promotional Display of Books in Stock, in all Haringey Libraries 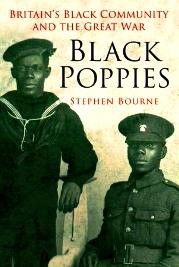 Community historian and author of many successful black British history books, Stephen Bourne (external link) shared memories of his adopted Aunt Esther, a black Londoner born before WW1. His book Black Poppies - Britain's Black Community and the Great War (The History Press, 2014) explores the military and civilian wartime experience of black Britons, from the trenches to the music halls.