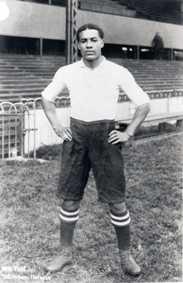 In 1909 Tottenham was in the sporting news. For the first time in its history, local football club Tottenham Hotspur was promoted to the First Division of the football league.

Spurs was then as it has remained since, amongst the most successful football clubs in this country.

In the same year the club acquired a new player called Walter Daniel Tull. He signed for the sum of £10 and this new signing was symbolic; Walter Tull was only the second black professional footballer to play in this country in the top division of his sport.

Catch of the Season

Born in Folkestone in 1888, Walter Tull was the son of Daniel, a carpenter from Barbados, and Alice, from Kent.

Walter was orphaned at 10 years old. He was sent, along with his brother, to an orphanage in London. It was there where his footballing talents began to shine.

Walter Tull was spotted by Clapton Football Club. Within three months of joining he played in the first team, leading them to win three football cup titles in 1908-1909. He was described as ‘the catch of the season’.

Soon noticed by the top football clubs, Walter signed for First Division Tottenham Hotspur in 1909. In June that year, he joined the team’s tour of Argentina and Uruguay. By September, Walter had made his first professional footballing debut in a match against Sunderland. He received much praise in the sports pages of the press.

Walter was 21 years old. At that time he was the only professional black footballer out of more than 600 professional footballers in the English leagues.

A model for all white men who play football

As the first black footballer for more than 20 years in this country, Walter Tull looked different from his fellow Spurs players. He was often called ‘darkie’ by spectators and reporters.

During an away match against Bristol City, matters grew much worse. Walter was targeted on the pitch with racist insults by the Bristol City fans. Their language was reported as ‘lower than Billingsgate’. Others reported it as a ‘cowardly attack' on Walter Tull. Another report, expressing outraged by the incident, said:

"Let me tell those Bristol hooligans that Tull is so clean in his mind and method as to be a model for all white men who play football."

After this Tottenham Hotspur FC had Walter playing mainly in their reserve team. During a game in February 1911 he came to the attention of Northampton Town Football Club, when Spurs beat them 7-1. The press wrote: ‘After 11 minutes Tull scored a pretty goal for Tottenham’. Walter Tull went on to score a hat-trick! In October 1911 he was transferred by Spurs to Northampton Football club. 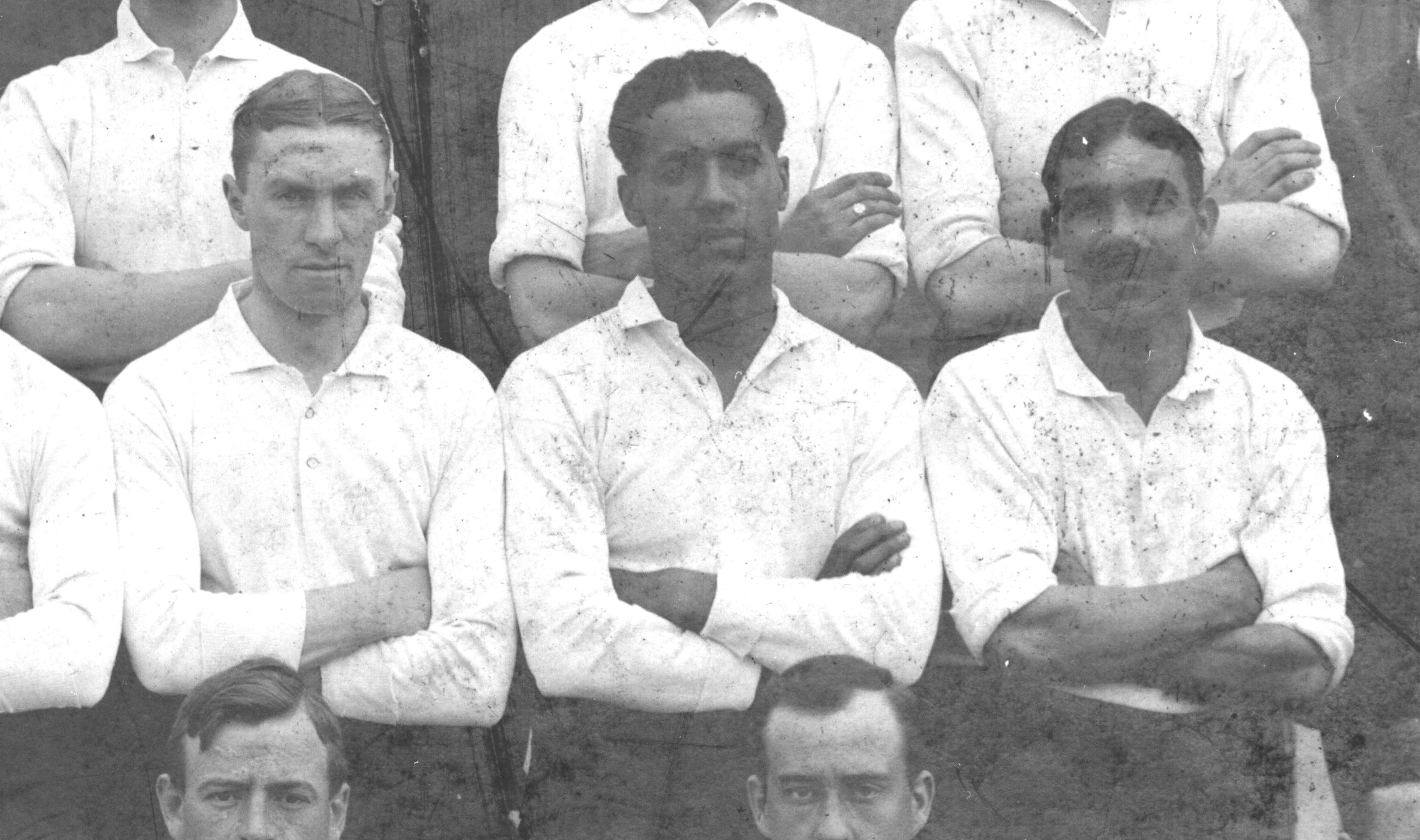 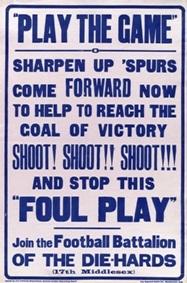 At the outbreak of the First World War in 1914, Walter followed other fellow footballers and signed up with the 17th (1st Football) Battalion of the Middlesex Regiment. He was a good soldier and his leadership qualities were recognised by the Army, who suggested he should be promoted. However, at that time, the Manual of Military Law 1914 forbade 'any person of colour' from being an officer. In spite of this, Walter went on to train to become a commissioned officer in 1917. Walter became the first British-born black officer in the British Army!

Walter led his unit, at the Battle of Piave on the Italian Front, through extreme weather conditions and brought his men back safely without a single casualty. Walter was mentioned in dispatches for his “gallantry and coolness under fire.” He was recommended for a Military Cross, which he never received - possibly because of the colour of his skin.

Tragically, Walter Tull was killed in action during the second Battle of the Somme in March 1918. He was 29 years old. He was such a popular officer that several of his men tried to recover his body and bring it back to the trenches. But their attempts were in vain. Alongside the tributes from his army colleagues, Second Lieutenant Walter Tull was awarded the British War and Victory Medal.

Like many soldiers who served in the Great War, Walter Tull's body was never found. At Britain's national Armistice commemorations there is focus at Westminster Abbey on the Tomb of the Unknown Warrior. This represents all the thousands of soldiers who, like Tull, have no known grave.

In October 2014 a Nubian Jak Blue plaque (external link) was unveiled in memory of Walter Tull in Tottenham. It was placed on the site of 77 Northumberland Park, Tottenham - the place where Tull had lodged, not far from the Tottenham Hotspur football ground where he made his name in football. Tull was the first black outfielder to play in the English premier league in 1909. Later, he joined up to fight in the Great War, becoming the first black British army officer. 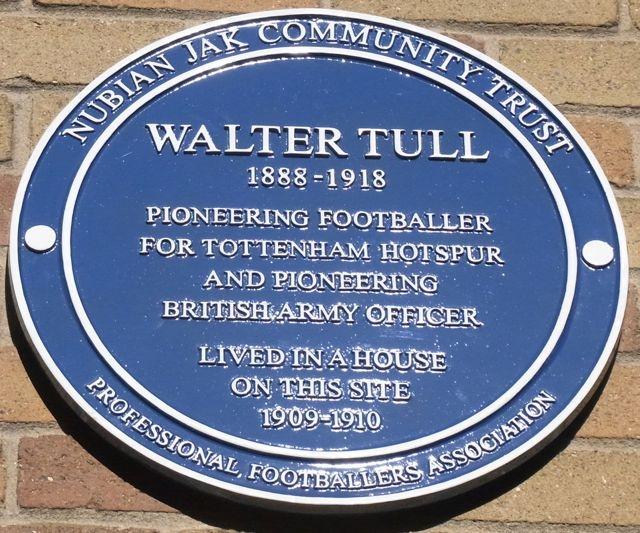 Earlier, in 2007, Walter Tull was chosen by local people to be commemorated as part of a metal sculptural portrait bench in Downhills Park (external link), in Tottenham. Erected by Sustrans, the sculpture shows Tull in his Spurs football kit, standing alongside two other local heroes. 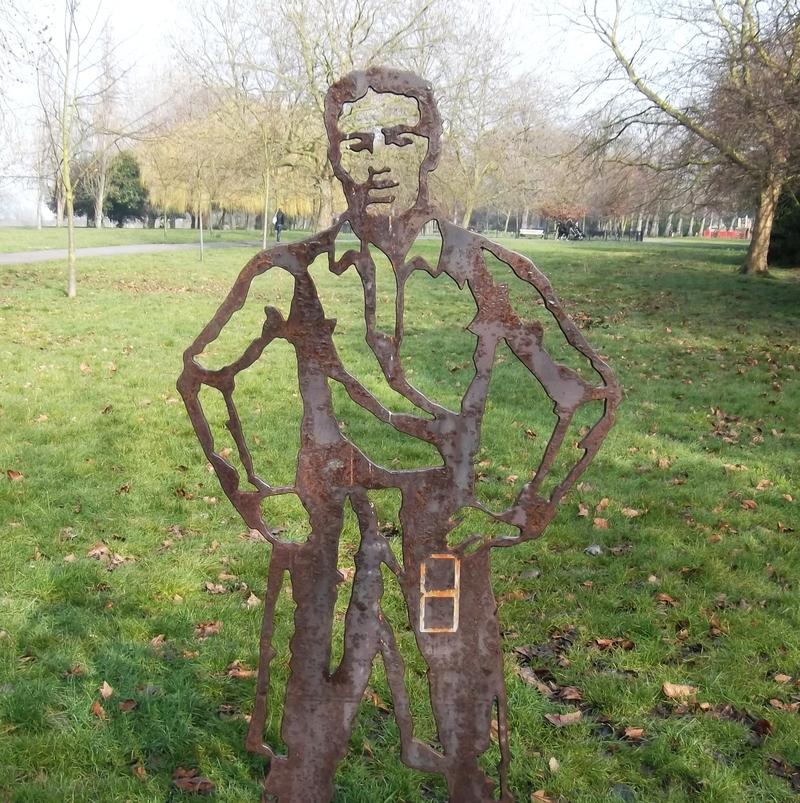 In 2009 - 2010, Bruce Castle Museum held an exhibition dedicated to Walter Tull, 100 years after he joined Tottenham Hotspur Football Club in 1909. The exhibition 'Spurs 1909: The Era of Walter Tull' was created specially for schools and was unveiled in Black History Month by the Mayor of Haringey, Councillor Bernice Vanier. Special visitors included David Lammy, MP for Tottenham, and Hesketh Benoit, local community sports leader and activist. 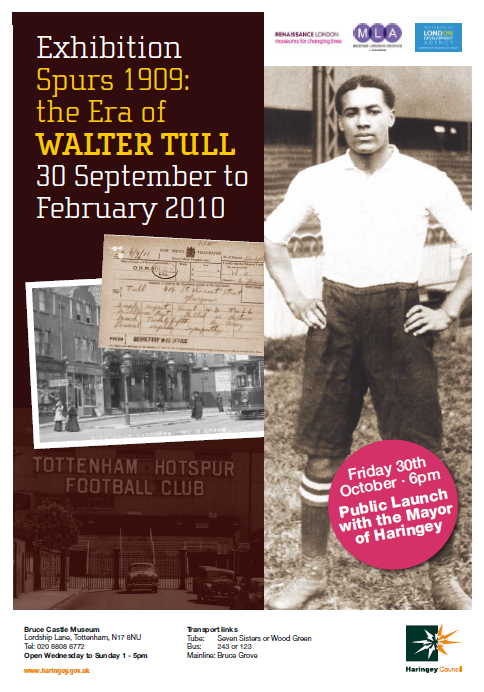 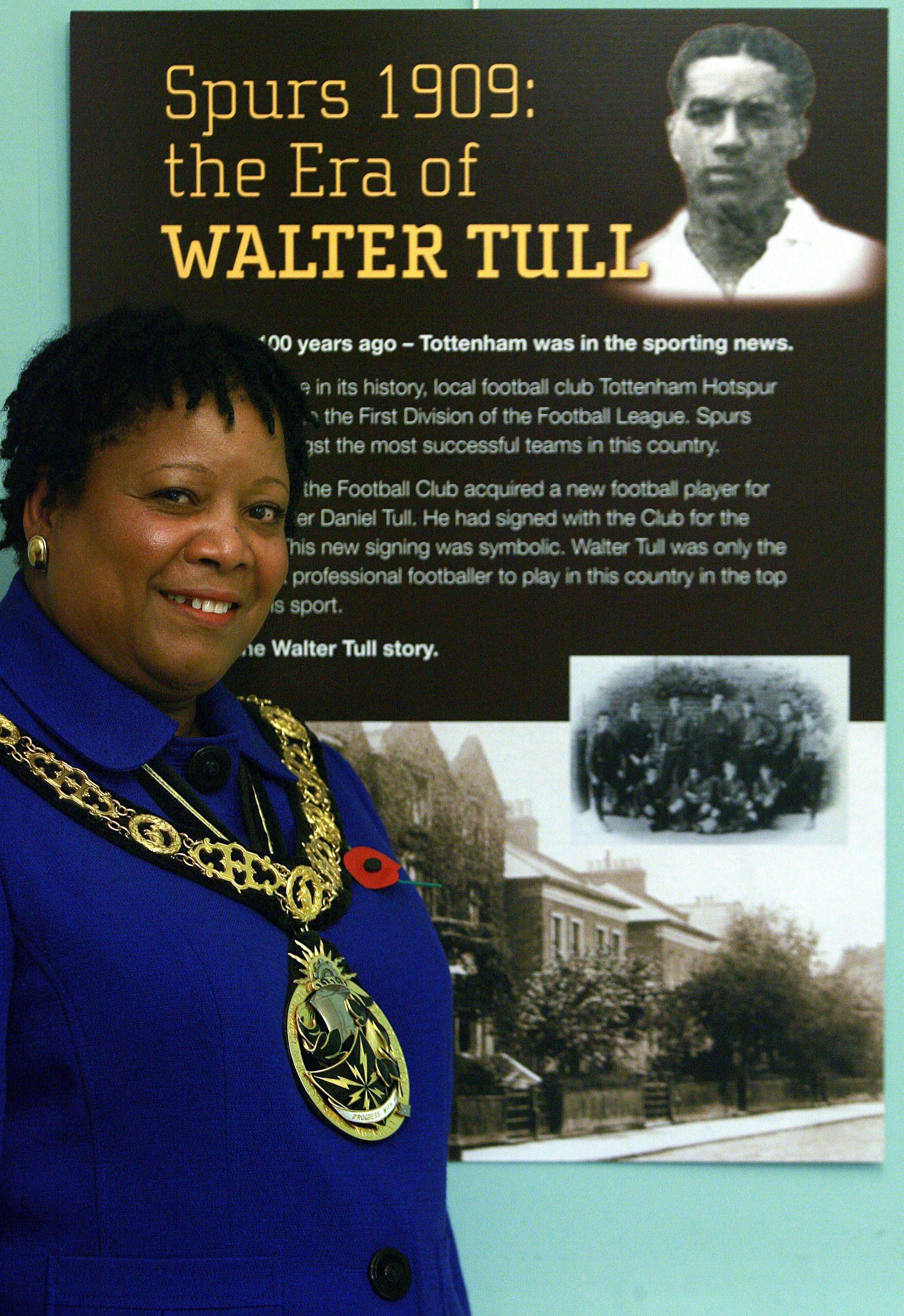 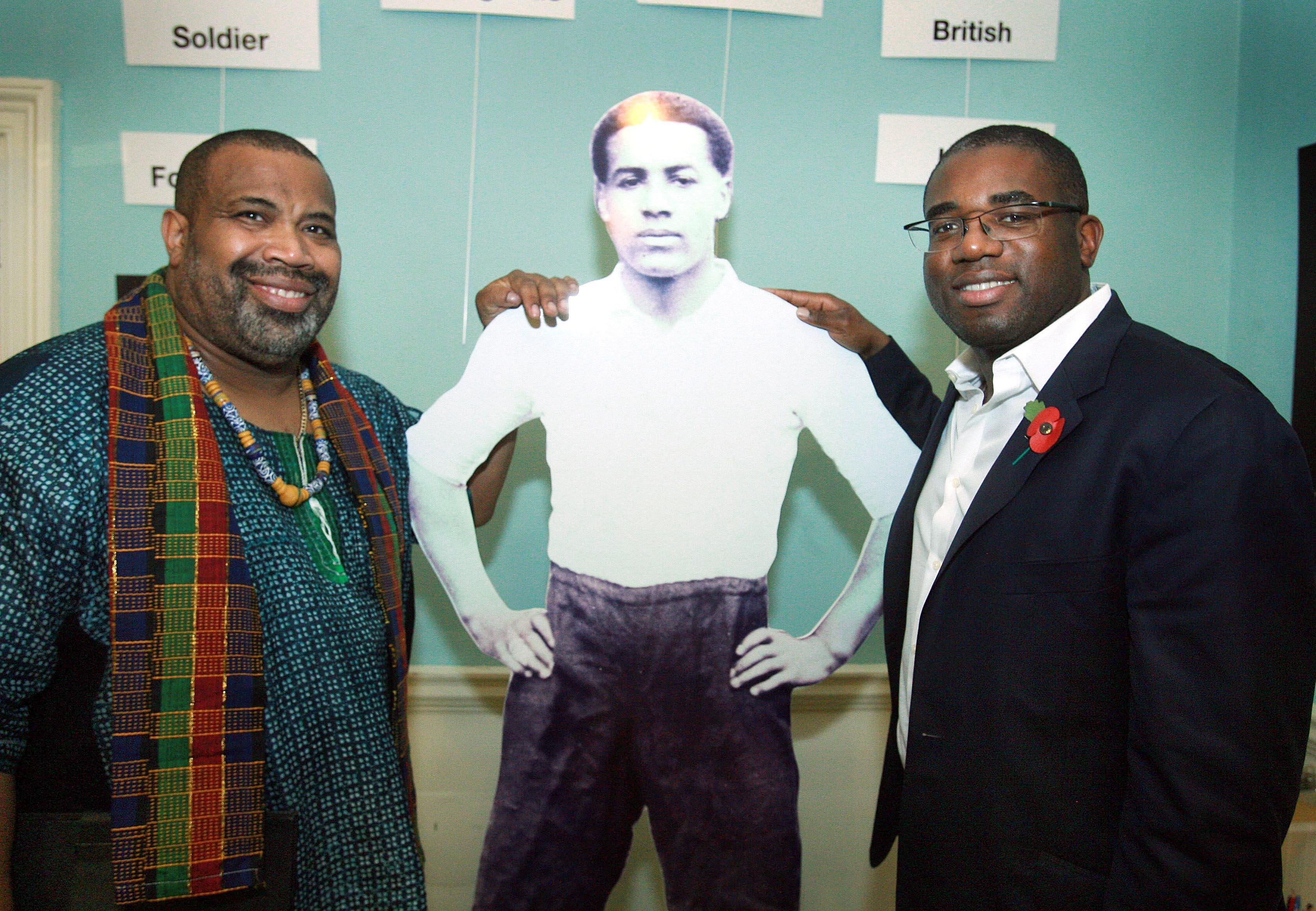 A campaign to ensure Walter Tull's name is not forgotten can be followed on the Walter Tull website (external link).