100 Years Ago - an online exhibition

A collection of a few poignant images from 1914 which recalls some local stories on the 100th anniversary of the declaration of the First World War in 1914.

All images and documents featured are courtesy of Bruce Castle Museum Haringey Archive and Museum Service. 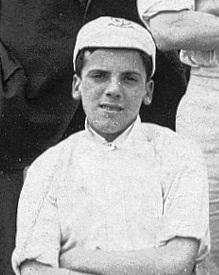 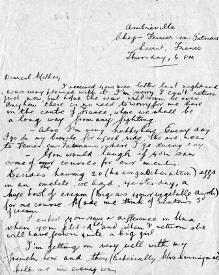 Syd Smith wrote to his mother from France expressing hope that the war would soon be over.

This letter was sent back home to St Albans Crescent in Wood Green by a young Syd Smith in August 1914. Syd was 16 years old and had been a pupil at Glendale County Grammar School in Wood Green. He was away from home on a school exchange trip in France when war was declared and was trapped abroad, unable to return to England. Syd wrote to his mother:

“I am sorry I can’t return just now ... there is no need to worry for me here in the centre of France where we shall be a long way from any fighting.”

By 14 August, Syd had managed to get back home. The only loss was his beloved bicycle that had to be abandoned in France. 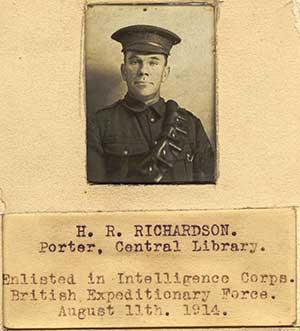 Over one hundred years ago, on 11 August 1914, Herbert Richard Richardson, a caretaker and porter at Central Library, Borough of Hornsey, was amongst the first men to join up at the outbreak of war.

He had enlisted with the Intelligence Corps of the British Expeditionary Force. He was 42 years old and lived with his wife Esther and three small children at 7 Church Path, Tottenham Lane, Hornsey. Richardson had previously served with the military from 1895-1907. With this experience, he was identified as a suitable civilian for call-up.

The Intelligence Corps had been newly formed on 5 August 1914 and was a specially selected group to join the British Expeditionary Force leaving for France.

By June 1915, Richardson was part of the Army Service Corps (Remounts Service). He survived the war and lived locally until 1950, when he died in Wood Green. 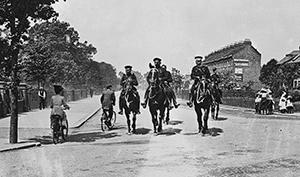 War was declared on 4 August 1914. The impact of what this meant for local people was immediately felt. The mounted King Edward’s Horse Regiment was sent to Alexandra Palace and Park. The regiment became an everyday sight on Bounds Green Road and other local streets. The King Edward’s Horse Regiment began to train troops at the Palace to be mobilised in preparation for battle.

Elsewhere, the ‘Tottenham and Edmonton Weekly Herald’ of 7 August 1914 listed reports on how local people were responding to the country being at war – from shops rationing food, to recruitment offices being kept busy and Spurs’ footballers being called up.