The proposal to rename Albert Road Recreation Ground consultation has now closed. Thank you for all your responses.

What we consulted on

Why we proposed to rename 'The Rec'? 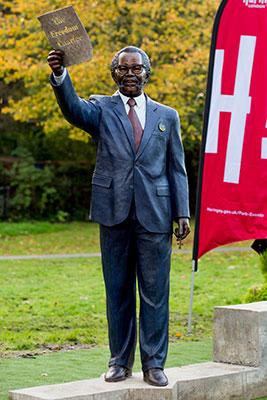 Haringey Council, the Friends of Albert Road Recreation Ground and other local stakeholders felt that it was the right time to look at replacing all of the above to one locally recognised name, which reflected the long and historical relationship that O.R. Tambo, his wife Adelaide and their family had with the area, and one that is reflective of the borough's values, culture and diversity.

Between October and November 2020 residents were asked if they agreed with the proposal to change the name of the Rec to O.R. Tambo Recreation Ground.

People are often uncomfortable with change, and some people will ask why place names, street names and statues matter. We believe they matter because, as a society who we choose to elevate, commemorate, and celebrate reflects the value we place on those people and the communities they represent. Furthermore it reinforces a belief that their life achievements can be a role model for others. Changing the name of a park does not eradicate racial injustice on its own, but it is one of the tangible steps we can take that ultimately makes that wider change happen.

The life and contribution of Oliver Tambo has been recognised in Albert Road Recreation Ground with a statue and memorial, however considering the views of stakeholders and the results of the public consultation, we are now pleased that the Rec will now be known as the O.R. Tambo Recreation Ground.

You can find the full report and the consultation results that were presented to the Council's Cabinet meeting on 9 February 2021 here at item 434.

Read more about Oliver Tambo's life and the park memorials.