Visit the new website for Bruce Castle Museum and Archive. 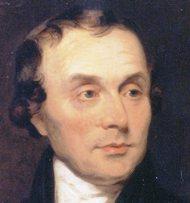 To celebrate the 350th anniversary of the Royal Society (external link) in 2010, the society supported many museums around the country to celebrate and honour its local scientific heroes.

At Bruce Castle Museum, we held an exhibition with an associated event programme for schools and the community to celebrate the life and achievements of local hero Luke Howard FRS (Fellow of the Royal Society), a chemist and founder of Howard & Sons pharmaceutical company. It was Luke's interest and scientific analysis of the weather and cloud formations that led him to become known as the Father of Meteorology. He lived and died at No 7 Bruce Grove, Tottenham, where an English Heritage Blue Plaque (Tottenham's only Blue Plaque, unveiled in 2002) celebrates Luke Howard's life and local connection - the 'Namer of Clouds lived and died here'.

The exhibition and project also gave an opportunity of working with the Royal Meteorological Society (etxernal link) - who kindly loaned John Opie's portrait of Luke Howard as well as a small number of original watercolour studies of cloud formations by Luke Howard - as well as Imperial College London's research academics working in Atmospheric Physics (external link). Together we worked to develop a prototype weather station roadshow for schools and the community and also to create an animated educational film The Man Who Named the Clouds, funded by the Opal programme (external link), that you can watch here:

The Invention of Clouds: Luke Howard, the Father of Meteorology

We were also supported with specialist talks by the environmental writer and historian Richard Hamblyn (external link), who had written an historical biography about Luke Howard, and the externded family of descendants of Luke Howard (external link), some of whom kindly loaned rare weather books and historical items of interest once owned by Luke Howard for the exhibition. These were exhibited alongside a number of items from Bruce Castle Museum and Haringey Archive's own collections. Latterly, we had promotional support for the exhibition and project by Gavin Pretor-Pinney (author of 'The Cloudspotter's Guide') and The Cloud Appreciation Society (external link).

Inspired by local hero Luke Howard and the clouds, since Bruce Castle Museum's own exhibition in 2010, local historians and the community have gone on to remember him still by creating a local group and website called Tottenham Clouds. In 2011, descendants of Luke Howard were reinvigorated to track down the gravestones for Luke and his wife Mariabella Howard, known to be buried at The Friends' Meeting House at Winchmore Hill. The full story is referenced here (external link).

Artists have also been inspired in the locality by the clouds and Luke Howard - with artist Natasha Vicars' deckchair installation in 2014, a portrait of Tottenham in Clouds presented at the Canalogy Festival and at the V&A's Tottenham Takeover; and more recently, Sky Puddles (external link), a site-specific installation by Carolina Khouri, in the courtyard of the Bernie Grant Arts Centre.

Luke Howard was celebrated on the 150th anniversary of his death in 2014 with the Tottenham Ploughman's CloudFest food and drink event (external link), dedicated to clouds and Luke Howard, at the Bruce Grove Youth Centre. On this occasion too, local cheesemakers Wildes Cheese produced a new cheese in his name - the Howard. 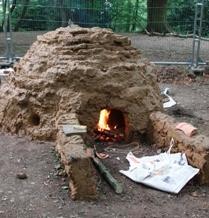 Stories of the World: London was one of the major projects at the heart of the London 2012 Cultural Olympiad. The Cultural Olympiad used the power of the Olympic and Paralympic Games to inspire creativity across all forms of culture, especially amongst young people.

Bruce Castle Museum was one of a cluster of organisations that undertook an individual project in 2010, leading to a major exhibition at the Museum of London in 2012.

In 1962, London archaeologist Harvey Sheldon (Birkbeck College, University of London) discovered a Roman pottery production kiln site in Highgate Wood. Harvey and his team excavated one of the kilns. It is still the oldest to be found in London. The kiln is presently kept at Bruce Castle Museum, although not all on display.

During the summers of 1971 to 1973 Nick Peacey and archaeologist Harvey Sheldon constructed a number of replica kilns in Highgate Wood, with re-enactments of the Roman firings. Our youth project was based on these original experiments - to discover how the Romans made and used the original kiln and how they created such dark-coloured pottery.

In July 2010, young people from Haringey came together for our Haringey Potter project to re-create the Highgate Roman kiln in Highgate Wood, under the supervision of veteran kiln-builder, Nick Peacey. 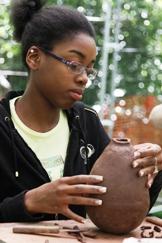 It was quite a challenge to do this in just two weeks. However, our dozen or so young people successfully built a kiln from the clay under their feet and made pottery from the very same material. The successful final firing of the kiln ensured not only their pots survived but a 'reduction' process was achieved (i.e. creating a kiln atmosphere where oxygen is reduced and the flames pull oxygen molecules out of the clay to change its character) - something not accomplished in the experiments over 40 years ago! The young people had successfully discovered the Roman method of making pots and firing them in such a way to make them dark-coloured rather than a light terracotta. Our pots clearly match the examples of Roman pottery found on the site, making a real connection between today and 2,000 years ago.

Local potter Mooki Hurst led workshops to encourage participants to enjoy freedom in their creativity and guide them towards achieving the best results. Young people from local award-winning magazine Exposure recorded much of the project, showcasing the viewpoint of the participants.

A selection of the pots made and the accompanying film were on display at a major temporary exhibition (of this project and others) at the Museum of London in 2012. Some of the pots are now on permanent display at Bruce Castle Museum.

In 2018, Bruce Castle Museum are currently working with the Friends of the Highgate Roman Kiln (FoHRK) - led by Nick Peacey, Harvey Sheldon, Michael Hammerson and Catherine West MP - and Highgate Wood staff to create a Heritage Lottery Funded project to return and display the original Roman kiln back as an educational resource in Highgate Wood.

If you are interested in making a donation to see the original Roman kiln returned permanently to Highgate Wood, or would like to register your interest in this project, please contact FoHRK on email: forkhw@virginmedia.com or staff at Highgate Wood on highgate.wood@cityoflondon.gov.uk

Recruited in partnership with Haringey Youth Service, our participants in the project came from a variety of backgrounds. Some had experience of pottery but none had built a kiln before. They are all proud to have been part of the history of pottery in their area. They are all Haringey Potters.