This sculptural installation and exhibition was held across different parks and gardens in the borough, and sought to challenge perceptions of what sculpture could be.

PARK ART in Haringey was commissioned in partnership with Haringey Council and funded by Arts Council England. The project was curated by UP Projects.

At Bruce Castle Museum there were two works on display as part of the Cultural Olympiad during the summer of the Olympic Games in London in 2012. One sculpture was installed on the front lawn of Bruce Castle, and another was placed in the Tudor Tower.

Artist Ben Long was commissioned to create a giant 9 metre tall 'Lion Scaffolding Sculpture' for the grounds of Bruce Castle Museum, the 16th century former manor house for Tottenham. This monumental sculpture shows a classical lion on a plinth and was constructed in situ entirely from builder's scaffolding poles. The artwork referenced not only the traditional sculptural archetype of the regal lion, but also served to highlight the role that work and labour play in the development of any artistic or creative pursuit. It also points to historical connections of the image of the lion with past lords of the manor of Tottenham, such as Robert the Bruce.

The lion was the eighth in an ongoing series of Scaffolding Sculptures by Ben Long, which the artist started back in 2004.

The artwork was completed and unveiled to coincide with day 68 of the Olympic torch relay that stopped outside Bruce Castle, as it passed on its route through Haringey. 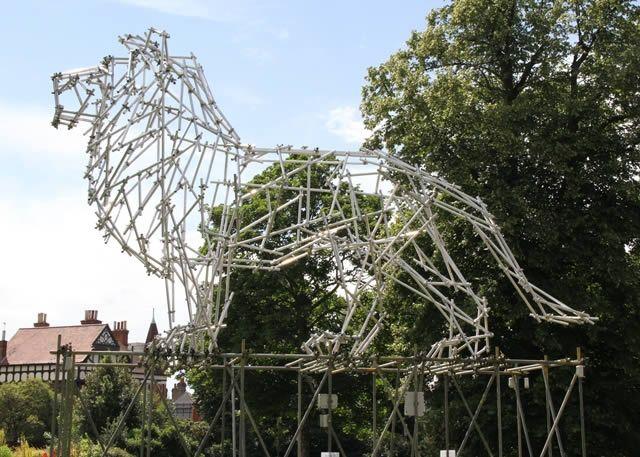 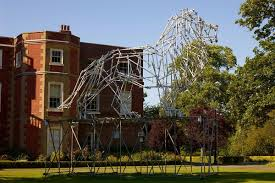 Follow this time-lapse photography film (below) by Ben Long, created to show the daily development of the building of the scaffold lion over one month.

Light and Sound Installation by 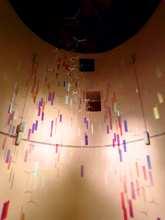 This artwork installed in the Tudor Tower at Bruce Castle responded to the unique characteristics of this former Hawks mews and its Tudor heritage.

Made from dichroic acrylic, the bespoke hanging/reflective sculpture filled the cylindrical interior of the building. Richman had been drawn to the circular form of the tower and filled it with floating areas of colour and light.

The accompanying soundscape by Kerr lent an industrial, contemporary twist to a Tudor melody. 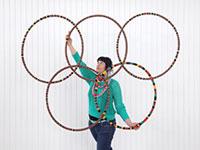 Part of the London 2012 Cultural Olympiad, 11 artists were commissioned by Haringey Council to work in a variety of media, each creating a piece of their own work and another in collaboration with local school children.

This exhibition of 2007 commemorated the Bicentenary of the British Parliamentary Act to abolish the transatlantic slave trade in 1807.

In 1807 Parliament made it illegal for British ships to transport enslaved Africans to our colonies.

The exhibition considered the trafficking of people from West Africa to the Caribbean from the 16th century to the 19th century, and our contemporary local figures in Haringey who campaigned for its abolition. The exhibition also contemplated the legacy and effects of this mass deportation of people - which is still very much in evidence today.

The 12 panels from the exhibition can be found here: Links & Liberty exhibition: Abolition of the Slave Trade 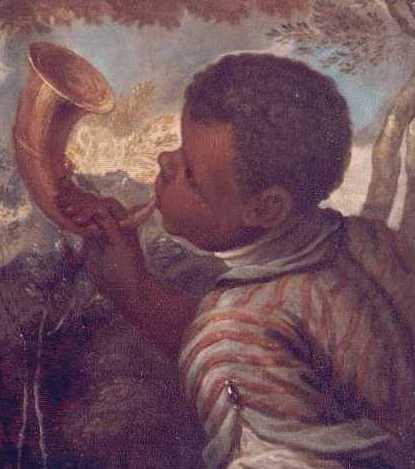 The exhibition was produced in partnership with Euroart Studios in Tottenham, and was funded by Awards For All lottery funding. It included the art installation 'Stolen', a life-size installation by artists at Euroart Studios (John Fowler, Lorraine Clarke and Nigel Young) of a section of a slave ship. School pupils were encouraged to climb inside to imagine conditions on board.

'Links & Liberty' has been digitally archived by researchers John Oldfield and Mary Willis as part of the 'Remembering 1807: Antislavery Usable Past', an online educational resource project, created to mark the commemorative outpouring in 2007 of heritage organisations and community groups around the UK in response to the 200th anniversary of the 1807 Act. The collections are a resource for understanding cultures of antislavery activism and protest memory. You can explore the digital resources for our project here.

Other commemorative exhibition projects held at Bruce Castle Museum also on the ‘Remembering 1807’ website include:

Ray Davies - 'See My Friends: The Kinks, Konk and Kin'

"Being creative fires me up. I like to think that what I do with my song writing encourages other people to be creative...” 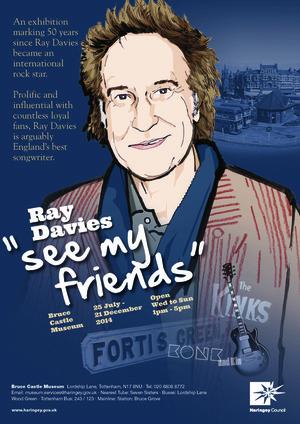 Ray Davies is one of rock's elder statesmen. August 2014 marked 50 years since his band The Kinks had their first hit record. Time for an exhibition at his local museum.

He is still friends with people he went to school with, and he lives not far from Muswell Hill where he grew up. He may occasionally be seen walking up the road, or in a café drinking a cup of tea. At once ordinary and extraordinary, Ray Davies is quite possibly England’s best songwriter.

Our exhibition in 2014 was an appreciative nod in celebration of the man and his music. It was also an opportunity to showcase the magnificent and extraordinary collection of Kinks memorabilia by collector Gary Forsyth, kindly on loan to Bruce Castle Museum.