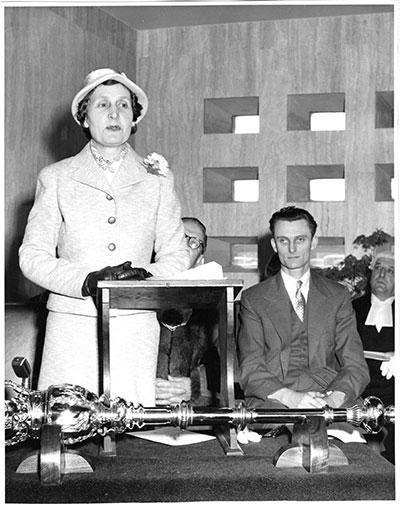 History books have often overlooked the pioneering work of local MP and councillor Joyce Butler - her dedication to women’s rights led to the introduction of the Sex Discrimination Act 1975.

Joyce Shore Butler (née Wells) was born in 1910 in Birmingham into a family of eight. She had a very happy childhood and enjoyed playing in the family’s large garden with her siblings. The greatest influences in her life were her parents. Both were Quakers and Joyce was brought up and remained a Quaker until the Second World War.

Joyce attended King Edwards High School in Birmingham. Civic issues were not taught at the school and there was very little political discussion. Her interests were mainly in English and History and she took a Higher School Certificate in Arts. During her last year at school she went on a school trip to Geneva, to the League of Nations, which may have sparked her interest in politics. She attended Woodbrook College at Selly Oak for one year. Following some secretarial/clerical work after she left college, she became fully interested in politics and joined the Labour Party when she was 20.

During this time Joyce continued to live at home with her parents and pursued political interests. She was influenced by the Left Book Club and social conditions at the time (in the 1930s) concerned her so much that she felt something must be done to change things.

Joyce met her husband, Vic Butler, in Birmingham and they married during the war. He was active in the local Labour party and worked for the Co-Operative movement. Joyce and Vic moved to London after the war where their son was born - six years after their daughter.

Joyce continued her political interests and in 1947 she became a member of Wood Green Council. She felt "it was the right thing to be doing" at the time with all the numerous post-war problems. Her main interest was in Housing and Town Planning. During this period, there was a great interest in new towns and particularly locally there was an urgent need to get council houses built.

In 1955 she entered Parliament - supported by the Co-Operatives - as Member (Labour and Co-Op) for Wood Green. Joyce remained a councillor for Wood Green Council until it was abolished in 1965 and subsequently became the leader of the new London Borough of Haringey. Joyce felt that she had plenty of ideas and now had the opportunity to put them forward.

A major achievement for Joyce during her 24 years in Parliament was her introduction (4 times) of a bill on Sex Discrimination under the Ten-Minute Rule, which later became the Sex Discrimination Act, something she is hardly recognised for.

The new Act was radical legislation at the time which introduced a woman's right to equal pay and status in the workplace and in society. Job advertisements now had to be sexless and it was no longer possible to offer a position exclusively for males or females. In everyday language, there were many changes - for example, "firemen" becoming "fire fighters".

Without her dedication to raising the bill in Parliament, women would not have the rights they have today and would still be unfairly excluded from opportunities in employment and education.

Joyce retired from Parliament in 1979 to spend more time with her family. She continued to belong to many organisations: she became Vice Chairman of Wood Green Age Concern - and was also President of London Passenger Action. She was a keen gardener and showed an interest in drama having been involved in amateur drama groups during her youth.