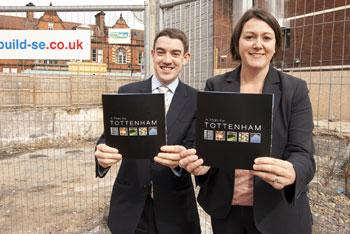 As the anniversary of the London riots approaches, Haringey Council today, 1 August, unveiled its long term ambition for Tottenham.

'A Plan for Tottenham' sets out a vision for the area from now to 2025 - building back better through economic growth; investment; improved neighbourhoods and regeneration of key sites.

"We want people and businesses to make a positive choice to live, work, visit, invest and stay in Tottenham - and the Plan for Tottenham makes clear how we intend to achieve this."The past year has seen tremendous progress with major investment secured; building work already underway on key sites, and wider improvements including community activities and the launch of our Jobs for Haringey programme."Commitment to, and investment in, Tottenham by both the council and the Mayor of London has brought renewed confidence and laid the foundations for change."We are clear that this is just the beginning of the journey. The Plan for Tottenham sets out our longer term commitment to building back better and making Tottenham a place everyone is proud to be a part of."

The Plan was launched today at the site of the iconic former Carpetright building on Tottenham High Road, which is being rebuilt after being burned down during the riots.

It was produced in partnership with the Tottenham Taskforce - which brings together community leaders, business experts and councillors to work together to improve Tottenham - and follows extensive consultation with local residents and traders.

It sets out how regeneration will be focused on key areas for development, including Northumberland Park; Tottenham Hale; Tottenham Green and Seven Sisters, and the High Road.

And it includes major milestones between now and 2025 so that progress can be checked over the coming months and years.

Highlights of the plan include:

Download A Plan for Tottenham (PDF, 5.5MB) - please note that this is a large file and will take longer to download on slower internet connections. Hard copies will soon be available from Council buildings.

For more information about how the council has been supporting Tottenham over the past year, take a look at the Tottenham One Year On leaflet (PDF, 830KB).