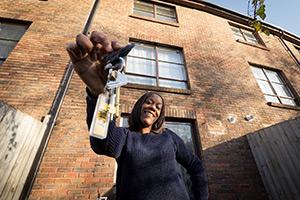 A mum has moved into her new council home in time for Christmas after our tenancy fraud investigators evicted the previous tenants.

Tracey will be spending the festive season with her family in her new property in Tottenham, after the house was recovered as part of an investigation into tenancy fraud.

In the last three years, the council has recovered more than 170 homes being illegally sub-let, allowing families in temporary accommodation to be permanently housed and saving the public purse more than £2million.

Tenancy fraudsters were given a temporary two-month reprieve as part of the council’s one-off amnesty, allowing them to avoid prosecution by handing in their keys by Saturday, 20 December.

Now officers will clamp down on those abusing council homes by illegally subletting them – allowing more families, like Tracey, waiting for a home to move into a property.

"Illegally subletting your council home stops families in real need from finding a home, and I’m pleased that mums like Tracey have moved into new homes thanks to our work.

"We’ve given those flouting the rules a one-off chance to avoid prosecution, but they should be aware that next year we will use every power we have to prosecute them.

"We’re committed to freeing up more homes for people who really need them as part of our long-term plans to meet Haringey’s housing demand."

Every home not occupied by the registered tenant costs taxpayers around £18,000 a year, and figures show that 90,000 social homes nationwide are subject to some form of tenancy fraud.

A change in the law last year means that tenancy fraud is now a criminal offence – with a prison sentence or fine of up to £5,000 for those who flout the rules.