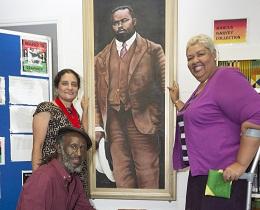 A plaque and portrait dedicated to one of the most important figures in black history has been unveiled at the Tottenham library that bears his name.

The painting of black rights campaigner Marcus Garvey was unveiled at the library in Philip Lane, with a memorial plaque, by Jamaican High Commissioner Aloun Ndombet-Assamba on Saturday.

Local artist Everall Hall, who donated his painting to the library in 2010 and pressed for the new plaque, joined the Deputy Mayor of Haringey, Councillor Kaushika Amin, to pay tribute to Marcus Garvey, who was declared Jamaica’s first ever national hero in 1964.

Born in the Caribbean country in 1887, Marcus Garvey developed a keen interest in books before moving to New York and urging African-Americans to be proud of their heritage and return to their ancestral homes.

After his death in London in 1940, memorials sprung up across the world – including the naming of the Marcus Garvey Library after him in 1987 to mark what would have been his 100th birthday.

Saturday’s ceremony included performances by local poets on the first floor of the library where the painting is hung. 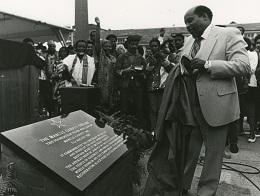 “Tottenham can be proud that its library is associated with such a principled campaigner for equality.“This impressive portrait and plaque, along with the huge resource of his books and speeches available in the library, will make sure today’s generation understands Marcus Garvey’s legacy.”

The library holds sessions and screenings about Marcus Garvey’s life throughout the year, culminating in a dedicated series of events across Haringey for Black History Month in October.

To find out more, visit your local library.