Holcombe Road Market back in business 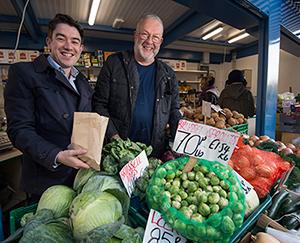 A popular Tottenham market, which has been trading in the area for nearly 100 years, has re-opened this week after a major refurbishment.

Holcombe Road Market, opposite Bruce Grove Station, has re-opened with a new and improved layout, new kiosks including three additional market stalls, and new paving, as part of the regeneration plans for Tottenham. The work also includes bespoke signage and a new CCTV camera to help make the area safer.

Stalls include Hall’s Greengrocers, Thompson’s Seafood; a new local business Prestige Patisserie and Brown Eagle, selling Caribbean food and drink which has been in business in Tottenham and Wood Green for a number of years.

The plans were developed by Haringey Council in close consultation with the Bruce Grove Stakeholder Group, which consisted of local residents and businesses.

“Holcombe Road market is a cornerstone of the Bruce Grove community and we want to see it return as a bustling shopping space. Previously the market was ageing and unsuitable so this refurbishment is a welcome boost for traders and shoppers alike. The market is now safer, cleaner and a more welcoming place which will allow Tottenham’s fantastic range of local traders to thrive.”

"The new market looks amazing and we've had an overwhelming response from local residents. Hopefully this will be the start of the next successful chapter in our family-run business which has been trading in Tottenham for approaching a century."