Haringey fights back against litter

A new nine-month trial to tackle litter in Haringey kicked off today, which will see teams of uniformed officers patrolling the borough handing out fines ranging from £80 to £400 to anyone dropping or dumping rubbish or allowing their dogs to foul our streets. 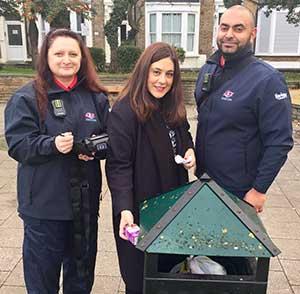 The trial is part of our drive to work with the community to make our streets cleaner and will include handing out fines to anyone who drops chewing gum or cigarette butts. The officers will wear body cameras with footage used as evidence if required. Fines will be issued to anyone aged 18 or over - people under the age of 18 will have their names and address taken for a letter to be issued to their parents.

“Only small numbers of people drop litter or fly-tip but it has a big impact on everyone who lives here. We are fighting back against the selfish minority who think it is okay to make a mess of our streets and these tougher measures will make people think twice before they drop litter in Haringey.”

Haringey is testing increased enforcement as part of a balanced approach which also includes more information to residents to raise awareness about the cost of clearing litter from our streets and how to deal with rubbish responsibly. Haringey recently teamed up with local people in Noel Park to raise awareness of Haringey’s free bulky waste service. Last month Haringey increased the on-the-spot fines for fly-tipping from £80 to £400, recognising that fly-tipping costs taxpayers in Haringey £3 million per year.

The uniformed officers will be employed by Kingdom Security.

can be found on our fixed penalty notice pages.