The Old Bakery gin - in love with local history 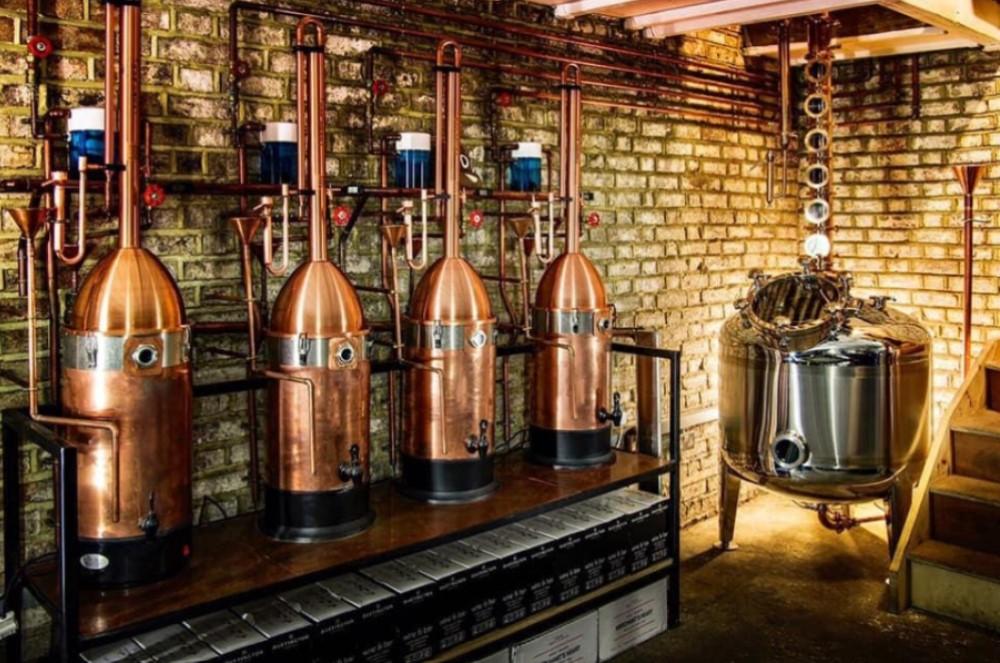 When Ian Puddick bought The Old Stables, The Old Bakery, and The Old Grain Stores in Pymmes Mews in 2013, little did he know the journey that this purchase would take him on. I spoke to one of the distillery’s core employees: a man mysteriously called Gorgeous George, from whom I found out that the story of this gin is full of nods to local history.

Ian’s purchase developed into a dispute over an old chimney, which uncovered the existence of an illegal gin distillery once run by Old Bakery bakers. Ian decided that, instead of using the premises for just his plumbing and consulting businesses, he would open a distillery and produce gin, as once done by the bakers.  Being used to dealing with pipes, Ian revived gin production on-site and Old Bakery Gin was born, bearing the name of the place in which it was created, even if the old recipe was lost. However, he tracked down the descendants of the Mews and obtained the original 4 ingredient botanical recipe (most Gins have a minimum of 12 botanicals), the exact combination is still lost in time but the same 4 botanicals are being used today

According to George, the gin is today consumed within the walls of The Foreign and Commonwealth Office and Buckingham Palace, where it is drunk with a slice of grapefruit, a basil leaf, and a superior brand of tonic water: the Japanese tonic, Merchant’s Heart. This small batch gin (approx. 50 bottles per batch) is sold in shops such as Harrods and Fortnum and Mason, and the company also offers a bespoke gin service, which can take as little as one to two weeks depending on client specifications. This year, the client happens to be the Ministry of Defence.

The distillery also makes rum, which, in true Old Bakery style, is a tribute to “Wen the Baker”—the fictitious name for a baker of Caribbean origin who used to work at the bakery. In another salute to their locality, Ian and his crew use Mavrodaphne barrels to age the rum, which acknowledges the presence of a significant Greek community in the area. Utilising barrels which once stored the sweet wine gives the rum a subtle sweet taste.

The pandemic hit the Old Bakery Gin crew hard as their gin is often sold at big events, such as gin festivals, all of which were cancelled due to the COVID-19 lockdowns. Other regular clients, including shops, were also closed and so sales dropped dramatically. In order to survive, the company had to make use of grants from the government, which ‘were useful’, according to George. Luckily, they were also able to reinvent themselves, thanks to the fact that they had the facilities to produce the much-needed hand sanitiser, by producing their own de-natured alcohol after their application to HMRC Customs and Excise for a license to purchase the substance was severely delayed. They have been supplying hand sanitiser to the Ministry of Defence, London Ambulance Service, and Enfield Council. They also moved their tasting format to an online experience.

The distillery made a video showing how they created de-natured alcohol for hand sanitiser using their existing equipment during 2020.

The Leak Detection Company - Ian’s plumbing business - also died down during the lockdowns as, especially in the beginning, people were too scared to use plumbing services unless in an emergency. Brexit, too, had an impact on the business, but it has not changed much in terms of the specifications of the drink. The gin retained its character, although sales to the continent have dropped as deliveries take longer and require more paperwork. ‘It remains to be seen if this is the new normal’, says George. The gin is also shipped to Australia, Hong Kong, and Taiwan.

George and Co. are now looking forward to the future: hopefully going back to normal in June 2021 and to good middle- and end- of- year- results. Let’s hope that this is the case, as this truly is one of the quirkiest local businesses around and, according to their website, there are more adventures to come.