5 January - update on Plan B and the Omicron variant

The Prime Minister yesterday (5 January), gave a statement to Parliament on the Omicron variant and the measures the government is taking to contain the virus.
Mr Johnson confirmed that the government will stick with Plan B for another three weeks, with a further review before the regulations expire on 26 January.

Change in requirements for confirmatory PCR tests
From 11 January, the need to do a polymerase chain reaction (PCR) test to confirm the result of a positive lateral flow device (LFD) test will be removed in England.

Under the new rules, people without symptoms can start their isolation from the day of their positive lateral flow test and will not need a follow-up PCR test to confirm. The aim is to prevent prolonged isolation for workers who may have been waiting for a confirmatory PCR test.
There are some exemptions from the move.

Pre-departure testing scrapped for travel to England
From 4am on 7 January, the government is scrapping the pre-departure test for people travelling to England. The requirement to self-isolate on arrival until receipt of a negative PCR test is also being removed. Instead, those arriving in England will need to take a LFD test within two days of arrival, and, if positive, they must take a further PCR test to help the government identify any new variants at the border.

In addition to the above, face coverings still should be worn by pupils, staff and adult visitors when moving around the premises, outside of classrooms, such as in corridors and communal areas.

Please remember that face coverings protect the wearer and others against the spread of infection as they cover the nose and mouth, which are the main confirmed sources of transmission of COVID-19 therefore it is important that these new guidelines are followed accordingly.

Important message for all residents on Omicron over the festive period

As 2021 draws to a close, the rapid spread of the Omicron COVID-19 variant, has resulted in high infection rates in Haringey as elsewhere. To limit its further spread in our community, we all must play our part.  Please follow the guidance regarding hands, face, space and regular testing.  If you feel unwell, please stay at home and get tested as soon as you can.

The local NHS is working tirelessly, dealing with unprecedented challenges to deliver care and to ensure that everyone can get vaccinated and be protected from COVID-19.

We have seen some fantastic examples of this throughout the year and last weekend, The Morris House Practice delivered 4,500 jabs in their high profile 24-hour JABathon at the Lordship Lane vaccine centre – a first for London and an amazing feat! On behalf of the borough, I would like to thank them and all our frontline NHS staff and volunteers for their incredible efforts to keep our community safe.

We are all impacted differently by COVID-19 and the council is working closely with the NHS and our community partners to reach across all our communities and support you at this time – whether you are suffering due to financial hardship, have to self-isolate due to COVID-19 or are in physical or mental crisis.

We have compiled a Joint message from the Haringey Borough Partnership which includes the NHS, Haringey Council, voluntary and community services. This outlines a great deal of important information on the support and services available to you.  Please take time to read it here.

On behalf of the council, I wish you and your families a safe and peaceful Christmas. 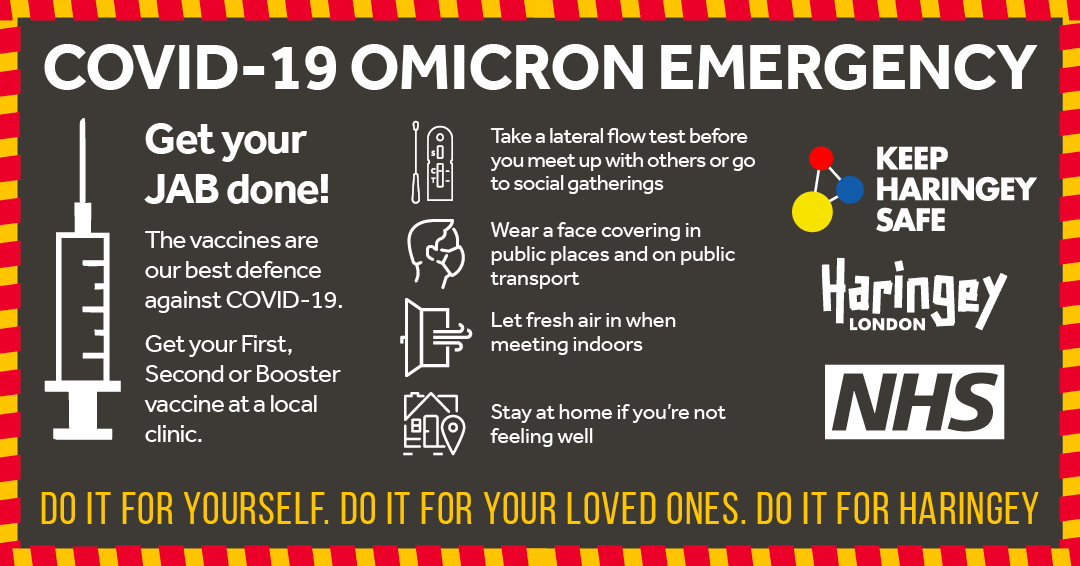