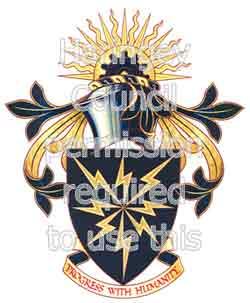 In coming up with a name for the new borough in 1964, it was decided to revive the old name of 'Haringey'. Before the Norman Conquest of 1066, a settlement was established (possibly near to St Mary's Church Tower in Hornsey High Street today) that was named after an Anglo-Saxon called 'Hering'. He gave his name to this area - 'Heringes-hege' (meaning 'the enclosure of Hering' or 'Hering's people'.)

That name developed and changed gradually into 'Hornsey', although the old name persisted in that part of Hornsey/ Tottenham which is known as 'Harringay' today.

The Heraldic description taken from the Letters Patent of the Grant of Arms reads:

sable eight rays issuing from the fess point throughout Or and for the crest on a wreath of colours in front of a demi-sun in splendour or a demi cogwheel sable.

The Arms may be explained as follows:

The contrasting colours of black (sable) and gold (Or) symbolise stability - the element earth is traditionally represented in black - and enterprise. The half cogwheel in front of the rising sun represents industry and a bright future - the rising sun symbolises the new borough itself. The radiating golden rays symbolise action reaching out to the boundaries of the borough, those that revolve around the centre of the shield symbolise movement. They also allude to the first television transmission from Alexandra Palace, one of the landmarks in the borough of Haringey. The Heraldic decoration includes a mantling or cloth formerly worn on the back of the helmet to keep the sun off the wearer. The motto is "Progress with Humanity".

For more details and history of the borough please contact Bruce Castle Museum.

You may also like to read 'Haringey Before Our Time: A Brief History' by Ian Murray (Published: Hornsey Historical Society, 1993); price: £2.70 (plus p& p). Available at Bruce Castle Museum.