See how you can recycle your Christmas tree in Haringey.

The Paddock was first Awarded The Green Flag Award in 2010. has retained it ever since.

Surrounded on two sides by water, the Paddock provides an important refuge for water birds and other animals and plants. The wilderness area in the centre of the Paddock has grown naturally to form young woodland and scrub dominated by elder, willow and blackberry, providing a valuable site for various animals. The Paddock sits next to Ferry Lane in Tottenham Hale, the site has two entrances, one of which is across the road to the Walthamstow Wetlands, and both entrances having site interpretation boards. Within the site there are clear routes taking the visitor down to the River Lea diversion channel and providing a nice view across into the Wetlands and the existing weir structure. The Paddock is managed for nature conservation and because of this there are several areas of dense undergrowth and historical rubble piles that are now overgrown with moss providing wildlife habitats scattered within the site.  Within the site there is also a dedicated picnic area with low cut amenity grass and picnic tables for quiet relaxation.

The Paddock Nature Reserve is an important ecological site in Tottenham Hale and is a key site for ecology and biodiversity within Haringey being classified as  a site of Importance to Nature Conservation, further sub divided into a Site of Metropolitan Importance. The Paddock is one of 60 designated wildlife sites in the London Borough of Haringey, and together these sites provide a valuable habitat for wildlife and the opportunity for people to experience, learn about and enjoy the natural environment.

History of the Park

Until the mid-19th Century the Paddock formed the northern half of the Mill Mead water meadow part of the common land that supplied grain to the neighbouring Tottenham Mill. After World War One the area was used as a sports ground, owned by the nearby Harris Lebus furniture factory, after the factory closed the land became largely derelict but was occasionally used to graze horses hence the ‘Paddock’ name. In the 1960’s excavation rubble from the construction of the Victoria Line was deposited in the Paddock creating the elevations present today.

The site was opened to the public as a Community Nature Park in 2000 and the existing site vegetation suggests that the Paddock is a typical post-industrial/abandoned site which has developed through natural colonisation, the extent of scrub and developing broadleaf woodland being typical examples of this. In addition, there are a number of ‘horticultural’ plant species along the southern edge of the site which indicates that the site has been altered by external forces (e.g. lines of London Plane along the southern edge of the circular path and Miscanthus grass species).  Though surrounded by water there is little ‘wetland’ habitat on the site and the eastern river bank is dominated by tall ruderals. The site sits within an ecologically rich area comprising the SSSI and RAMSAR Walthamstow Wetlands, the Lea Valley and Tottenham, Marshes, with the River Lea being integral to the whole area.

The development of the Paddock, a public realm project proposed for Tottenham Hale has been identified in the 2016 Green and Open Spaces Strategy (GOSS), and involves transforming an underutilised ecological asset into a cleaner and safer place for local resident population to enjoy as well as providing a much needed wildlife refuge. – The project will provide a range of ecological and other enhancements to improve both its value for environmental education and biodiversity through well thought out and considered design, improved management and long term sustainability of both hard and soft features. The Paddock sits within an ecological and biodiverse rich area and will contribute sympathetically to this wider picture by both physical improvements, appropriate management and a strong volunteer base - see image for concept ideas. 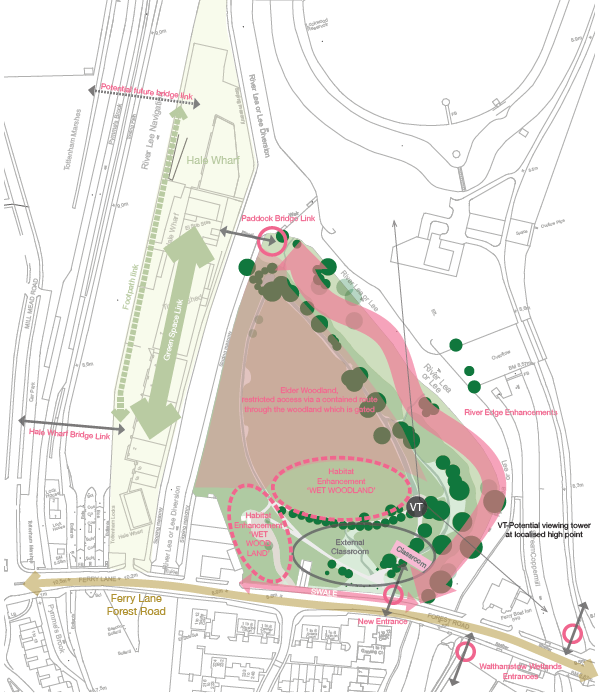 For all the latest updates on the project and how you can get involved visit the Tottenham.London website (external link).

The Paddock Friends Group can be contacted via Facebook (external link).