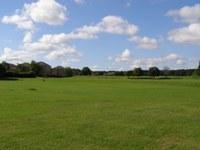 Muswell Hill Playing Fields is situated in Haringey and lies on the borough’s north eastern boundary, close to the A406 North Circular Road.

The site is nearly 10 hectares in size and is listed as a ‘site of local importance for nature conservation'.

There are 6 usable grass soccer pitches, plus a further pitch, which is subject to flooding and one separate space that is historically a cricket pitch. Temporary changing room accommodation and welfare facilities for Parks ground staff are also available on site.

Extensive consultation took place with local residents and interest groups in 2008 to inform decisions as to what improvements should be made. The project was formally introduced in September 2008 at the Muswell Hill Area Assembly meeting. The results of the consultation can be found in the attached files section below.

Based on the discussions and survey results a Master Plan was drawn up and the project costed. Proposals for a phased approach to construction based on available funding were proposed and approved by the council’s decision-making Cabinet in April 2009. Plans, highlighting the new play and sports provision can be found in the attached files section below.

A Planning Application for the whole of the master plan was submitted and approved by Planning Committee in November 2009.

A works contractor was appointed following a tender process and work commenced in February 2010 and was completed in August.

The area developed has been restricted to the former cricket pitch and to internal paths leading to it. The new mini-park facilities consist of:

The new mini-park was opened in November 2010 by Cllrs Dogus, Engert and Newton.

The council is continuing to raise capital to carry out further improvements which include the construction of a new community, sports pavilion and café / toilets and football pitch drainage improvements.

If you would like any further information regarding the planned improvements to Muswell Hill Playing Fields or to give your views please submit to Parks Service using our park e-form, or call 020 8489 1000.