More than just swings and roundabouts

Children in Haringey have benefited from exciting and stimulating new play equipment worth £1.6m.

‘Playbuilder’ funding came from the Department of Children, Schools and Families (DCSF) and was part of a £235m Government investment in children’s play, aimed at ensuring children across the country benefited from innovative and adventurous play sites.

The essence of the project was not just about using traditional equipment such as swings or roundabouts. It was about creating new, innovative and exciting play areas that are safe and accessible, through the creation of natural and imaginative play elements.

Old playground was removed in 2008 and has now been refurbished, together with the creation of a new natural play space consisting of a fallen tree stepping logs.

Refurbished to include new play items and new planting.

New natural play area has been created. A log climbing facility together with the enhancement of the existing play facility on the estate will give added new play opportunities for children and young people.

Area has been totally refurbished. Pointing of the existing brick surrounds and two murals created which has brightened up the estate. Raised planters are also part of the scheme. Work for this will be carried out in autumn 2010.

A new mini park has been created in Muswell Hill Open Space (Coppetts Road, N10) offering traditional play facilities, new natural play space, a Multi Use Games Area and a skate park which is scheduled to be completed by end of July 2010.

Work to increase play opportunities on the estate was carried out in conjunction with local residents and Homes for Haringey (HfH). The area is now located to the front of the estate linking it with the existing playground. New additions include seesaw, climbing chains, fallen tree log and boulders creating new additional play feature for the estate.

Another HfH site now extensively extended to offer children within the Estate a varied experience. New climbing unit with double slide has been installed together with jumping discs, created mounds, refurbished infant swings and safety surfacing, single point swing and the addition of trees. As part of the overall improvements flowerbeds to the front of the estate were improved with new species of planting.

This HfH site has been re-landscaped to create new play options. The newly refurbished playground now has increased children’s opportunities to play, in a safe and secure environment. The improvements include renovation of the existing younger children’s climbing unit, the addition of a wide slide, a nest swing, a chain climber and various climbing logs. 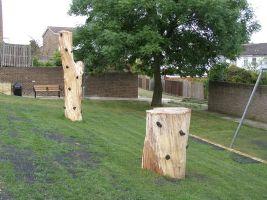 The addition of extensive fencing around the Markfield Project.  Improvements included the complete remodelling of the entire wooden fencing around the Markfield Project. Playable items such as a bubble panel, talking tube and posting box now enable children from within the project to interact with people outside of the fenced area and vice versa.

An extensive new natural play feature has improved the play possibilities, together with some landscaping works. This has increased and created better play opportunities for children. Equipment includes a large wooden play structure, a basket swing and some fallen logs. 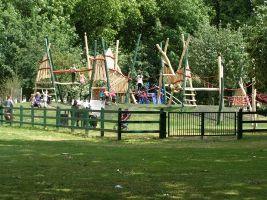 Extensive renovation with the removal of all of the old play facilities. The site has been greened up offering undulating mounds with new exciting equipment.  A jungle climbing, new swings for infants and juniors, basket swings, an embankment slide, climbing logs, a toddler unit, boulders and a selection of fallen logs have all been added.

A new play area has been created replacing the old playground which had come to the end of its natural life. The new play space has been developed to offer many more play opportunities for children using the playground. The area now offers new and exciting play items including a bike track, as well as outstanding natural play features. 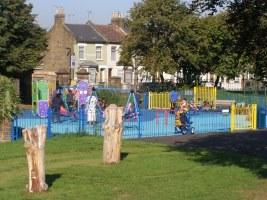 This site has been totally refurbished. All of the old equipment has been removed, with new and exciting play features transforming the play space including a gigantic play tower featuring a wave and enclosed slides. The playground now offers lots of play opportunities for children young and old.

Our parks are opened at dawn and locked at dusk. These times change depending on the time of year so for more detailed closing times please see our Approximate Park Locking Times (Word, 55KB)