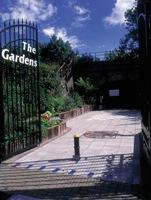 The Gardens' Community Garden opened in 2002 and is located in Doncaster Gardens, off Stanhope Gardens, N4. It was first awarded a Green Pennant, now Community Green Flag, in 2006, and has been a winner ever since.

The Garden is used by schools and play schemes, and is a place for neighbours to meet and relax, it is known locally as 'The Oasis' in the Gardens.

Living Under One Sun Community Allotment 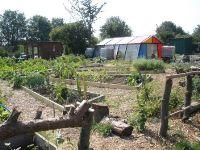 Living Under One Sun Community Allotment Project is based on the East Hale Allotment Site, adjoining Tottenham Marshes.

The project is inspiring local residents to grow and cook their own produce - while building friendships, skills and communities.

The woodland consists of over a hectare of conservation/amenity area at the southern end of Lordship Recreation Ground, Tottenham’s district park, N17. It lies to the east of the 'greenway' main path from the Downhills Park Road entrance. The Community Woodland first won its Community Green Flag in 2010.

The woodland was planted with native species in the mid 1980s to re-create an area of what would have been the original Tottenham woodland. The woodland includes a wide range of native trees, shrubs and other flora.

Until recently the woodland had been left to grow naturally. It became dense and few people ventured in except for antisocial purposes. It was then 'rescued' as an area for conservation/relaxation/nature-appreciation.

There is a winding path throughout the woodland constructed by volunteers from the Friends of Lordship Rec and BTCV in winter 2007/08, made up of semi-sunken wooden planks at the sides and woodchip surface. It has been maintained by the Friends since. Interpretation boards, designed by the Friends, were added in late 2008. Since that time the path and woodland have become very popular with dog walkers and other park users.

The southern end of the wood includes the site of a second world war air-raid shelter which suffered a direct hit on 19 September 1940 causing over 40 casualties - Tottenham's worst single loss of life during the war. The Friends, in conjunction with some of the surviving family members, have recently commemorated that event and intend to ensure the continuing tranquillity of the area as a mark of respect.

The Friends were established in 1989 to care for the historic tower of St Mary's Church, Hornsey High Street, N8. Hornsey Church Yard first won a Community Green Flag in 2010.

Their objects are to ensure a future for the historic tower and to encourage the maintenance of the churchyard and memorial garden as a place for quiet recreation for the local community.

The Friends’ activities are managed and administered by the Committee which organises events which are open to members and the general public, as well as undertaking the custodial role for the Tower. Members are welcome at committee meetings and at the Annual General Meeting. All committee posts are elected each year at the Annual General Meeting.