Today more and more companies are becoming much more environmentally responsible and are seeing the benefits that corporate volunteering brings to communities. Haringey welcomes companies who want to carry out improvement works to the borough's green spaces, and has facilitated a number of workdays which have seen small improvements make large scale changes to park users. 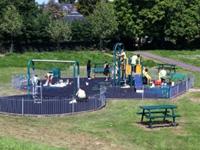 In May 2012 over 25 volunteers from Viacom carried out improvements to Woodside Park. The teams picked up their paintbrushes and shovels to improve the two playgrounds within the park as part of their global initiative that sees employees supporting their local communities.

Both sites have benefited hugely and have been improved by the efforts Veolia staff put in.

Around 120 volunteers from the Bank of America were involved in carrying out three main tasks identified by the Council, the Friends of Lordship Recreation Ground and London Play.

Tasks included maintenance to the adventure playground and installation of seating boulders and stepping stones in the youth area. 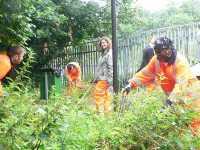 A team of National Grid volunteers took on various tasks within the park, led by the London Wildlife Trust, including cutting back vegetation around the Oxford Road entrance to improve accessibility and visibility for park users, removing weeds from the shrub beds around the central play area and installing bird and bat boxes around the northern section of the park.

The event was part of the project team’s Environment Week initiative, which involved having an extra focus on eco-friendly practices and activities. 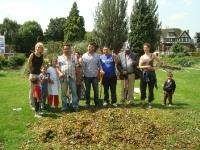 As part of the Ariel Capital Clean-up events held in five boroughs in June 2012, environmental charity Groundwork organised for a team of volunteers to tidy up Chapmans Green.

Volunteers armed with cleaning equipment and bags of enthusiasm carried out a whole range of activities including weeding, planting, litter picking, scrubbing railings and sweeping.

If you work for a company that would like to take part in volunteering and would like to discuss the opportunity then get in touch using our park e-form.