LGBT+ History Month is a month-long observance of lesbian, gay, bisexual, transgender and queer history, as well as a means of raising awareness for the issues faced by LGBTQ+ people. This year’s theme is Poetry, Prose and Plays.

Haringey has a strong history of battling homophobia and celebrating equality. Check out our timeline below.

We’ll be updating our pages throughout the month!

Here, we look at how figures from Haringey joined the battle against Section 28 - which until 2003 banned local authorities from sharing materials that “promoted homosexuality” in schools - and explore other LGBT+ moments in our borough’s history:

Homosexuality was decriminalised in the UK.

Gay rights became part of the Labour Party’s manifesto. At the time, Haringey was one of 10 councils who pitched in to donate more than £600,000 to gay projects and groups.

LGBT campaigning stepped up this year. A group called Positive Images was formed.

Labour then won control of Haringey Council, with lesbian and gay equality part of the manifesto. The council’s Lesbian and Gay Unit was launched - the first of its kind in the country - to highlight the rights of LGBT people to council staff. Pioneering campaigner Femi Otitoju was part of the unit, which is now part of our equalities team.

A book called Jenny lives with Eric and Martin, which told the story of a girl living with her dad and his partner, was available to school children in Haringey. A group of local parents complained - sparking protests on the streets of Wood Green, for and against gay rights.

Watch a news report on the gay rights protest in Haringey:

Positive Images and Haringey Black Action organised the first UK demonstration ‘Smash the Backlash’ to highlight the stories of black lesbians and gay men. The demo went from Duckett’s Common to Bruce Castle Park via the Roundway in Tottenham. 3,500 people took part.

Bernie Grant, then-MP for Tottenham, became the first MP to voice opposition to Section 28, which was brought in a year later in 1988.

The Department of Education and Science expressed concerns to Haringey Council’s education team about the “promotion of homosexuality”. It came after our Lesbian and Gay Unit wrote to the borough’s head teachers, urging them to share positive views of homosexuality with pupils.

On 23 May, the night before Section 28 became law, four protestors, including Haringey’s Booan Temple stormed the BBC 6 O’Clock news, handcuffed themselves to equipment and shouted ‘Stop section 28’.

Equalisation of the age of consent for gay men nationwide.

Then-MP for Hornsey and Wood Green Barbara Roche, who was Minister for Social Exclusion and Equalities, spoke in support of civil partnerships, saying there was a strong case for allowing same-sex couples to register their relationships.

The T-shirt Haringey protester Booan Temple wore when she stormed the BBC went on show at Bruce Castle Museum, as part of the From the Closet to the Collection: Haringey LGBT Exhibition.

GIRES (Gender Identification Research and Education Society) was set up to improve the environment in which gender non-conforming people live. 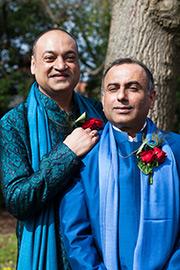 Creative grooms Benjamin Till and Nathan Taylor wrote and staged their entire wedding as a musical - including sung vows, sung readings and show-stopping ensembles from the congregation. Our Gay Wedding: The Musical was staged at the Alexandra Palace Theatre and shown on Channel 4.

Haringey begins work to make the council a more LGBT+ friendly place, with support from Stonewall.

January - The LGBTQ+ Community Network is formed, consisting of 15 organisations from across the borough working with and championing the needs of the LGBT+ population.

February - Cabinet reinstates its commitment to the LGBT+ population with a new action plan.

June - The Haringey Vanguard, an archiving project focussed on the histories of black, Asian and minority ethnic LGBTQ+ communities in the borough, is formed. 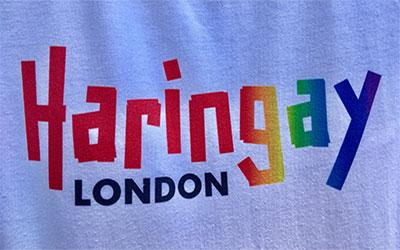 September - The Haringey Has Pride project re-enact a famous Pride celebration in Haringey that took place in 1989, protesting against the then government’s Section 28 policy which prevented teaching about LGBT+ identities and sexualities in school.