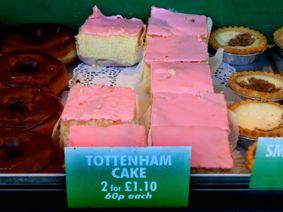 Tottenham Cake is a local well-known delicacy, sold country-wide. It is a tray-baked sponge cake topped with very sweet, pink icing. Originally produced by a local baker, the Quaker Henry Chalkley, it was sold for a penny a 'cube' (one old penny of course), with smaller pieces only a half penny. The distinctive pink colouring is said to have originated by using mulberries which grew in the grounds of the Meeting House of the Tottenham Friends (Quakers) on Tottenham High Road.

When Tottenham Hotspur Football Club won the FA Cup for the first time in 1901, the cake was given free to local children in celebration of this historic win for Spurs. Local Quakers still make Tottenham Cake today and it is also sold in high street bakers.

The origins of Tottenham Cake and how it was made was showcased on 'The Great British Bake Off', first broadcast Tuesday 17 September 2013 on BBC2.

On BBC Radio 4's The Media Show (broadcast 16 October 2013, 4.30pm), the Controller of BBC2, Janice Hadlow, said that it was only through the Great British Bake Off that she learned about Tottenham cake and its Quaker origins.

You can find out more about Tottenham Cake and the different recipes below.

Local historian Peter Brown is associated with the Friends' Meeting House in Tottenham (Quakers). The high street chain Greggs the Bakers have their own recipe.

Quantities as for a 7" round tin (38 square inches)

Mix margarine and sugar (as for Madeira cake)
Beat eggs and mix in
Fold the mix into the flour
Add vanilla, nutmeg and mix well
Add milk as required to form a 'dropping' consistency
Pre-heat oven and bake at 150°C for 50 minutes

To achieve a flat-top cake, cover with foil.

This is either lurid pink or shocking pink.

Grated coconut was always sprinkled over the icing but invariably caused problems for most Quakers with false teeth,as the coconut would get stuck. This should not pose a problem for most people these days.

Tottenham Cake used to be a children's cake. It was cut into squares and these were sold for one penny i.e. less than half our present penny. End pieces might be sold for half a penny.

Kindly supplied by Sandra Day of The Friends of Bruce Castle (external link), here is another version of Tottenham Cake. The recipe may be found in The Modern Baker Confectioner and Caterer Vol II, New and Revised Edition By John Kirkland. The wording is taken directly from the page, as published in 1931.

pp. 82
It sometimes happens that a large number of pieces of cheap cake are required at very short notice for such functions as children’s treats or tea meetings, and in such circumstances it may be almost impossible to prepare some thousands of buns or small cakes. Resort is then had to cheap sheet cake, which is easily made and looks large at the price at which it is sold. Ten cheapest cake of this sort that may still give entire satisfaction is Tottenham cake. For this the following ingredients may be used:

The materials are made into a soft dough in the usual way, and then spread on baking sheets with edges all around about 1½ in. deep. The sheets should be greased, and then have a sheet of bakehouse paper spread on the bottom. The sheets, after smoothing on top with a little milk, should lie for about ten or fifteen minutes to lose their toughness. They are then baked in an oven at a temperature of about 430° to 440° F. The paper on the bottom facilitates he easy removal of the sheets from the tins. After cooling they are thinly iced over with water icing made with pulverized or second-grade icing sugar and hot water into a thick paste, and flavoured with a few drops of peppermint. The cakes are then cut up, generally into three-cornered pieces of any size desired. This cake sells well, when freshly made, in the vicinity of schools or factories.

Our story starts with "A Friend", known as Quaker,
Henry Chalkley by name, a Tottenham baker.

For one penny piece, soft sponge could be bought,
mis-shapen, a ha'penny, a feast that was sought.

Pink icing with colour from mulberry so red,
So sticky, delicious, the people were fed.

The cake it was given, free of all charge,
Away to the children, small, and some large.

In traditional manner now sold by Greggs,
'Tis baked in squares, you buy, not beg.

Some may speak of eccles, a scone or eclair,
But its Tottenham cake we're talking,