Just as many houses in the borough are of cavity wall construction, so are many of the Council owned tower blocks. Prior to the introduction of the Energy Company Obligation in January 2013 it had not been possible to insulate many of these blocks because there was no funding for access equipment. The only blocks which had been insulated were those that had been scaffolded for other purposes, such as window or gas main replacement.

The Energy Company Obligation was introduced in January 2013 and in December 2013 the Department of Energy and Climate Change announced that changes were proposed to the programme. The proposed changes would mean, among other things, that that there would be less funding available for high rise cavity wall insulation from April 2014 and hence it might not have been possible to have the remaining blocks insulated.

Fortunately we had already done some preparatory work since the start of the Energy Company Obligation. Working with Kershaw Contracting Services we had identified the remaining uninsulated high rise blocks and verified where necessary with the insulation manufacturer (Rockwool) that these blocks were suitable for insulation. Once the proposed changes to the Energy Company Obligation were announced in December 2013 we were able to very quickly agree with Kershaw Contracting Services a project plan to ensure that we got all the remaining blocks insulated well in advance of the April 2014 deadline.

In order to minimise costs of access the work was carried out by Rope Access Technicians abseiling down the walls of the buildings. Work started on 06th January 2014 and was completed by the middle of February 2014. In total 499 flats received cavity wall insulation which should make them warmer, more comfortable and less expensive to heat.

The photographs below show how the work was carried out.

The Rope Access technicians descend the building on ropes: 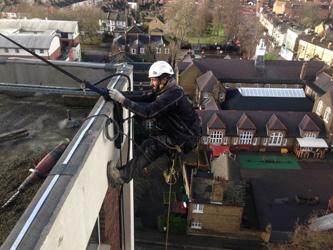 Holes (26mm) are drilled in the external brickwork: 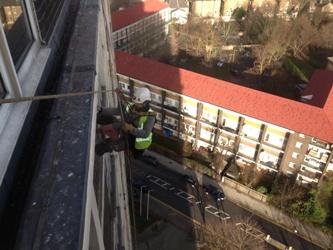 Holes being drilled at Stellar House: 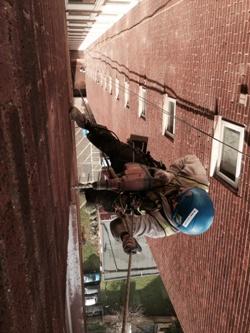 Holes are drilled to a specific pattern all the way down the building. On the ground you can see the lorries which carry the insulation material and the machines which blow it through the tubing and into the wall cavity: 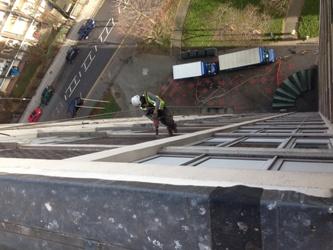 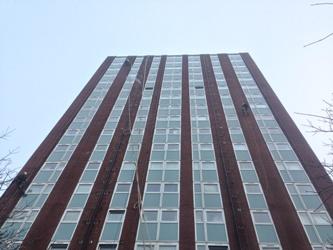 The insulation is blown, under pressure, into the wall cavity before the holes are repointed to prevent water ingress: 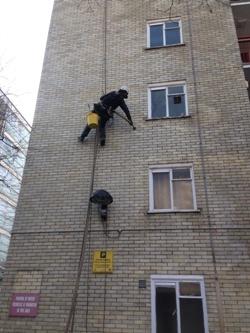