N17 Radio Programme has won Best Arts Project in the 2021 Hearts for the Arts Awards.

N17 radio programme was created by students of Harris Academy Tottenham in partnership with Kick it Out, Threads Radio, RoughHouse Theatre playwright, Dougie Blaxland and Haringey Council. With the support of the Windrush Day Grant, the partners worked collaboratively to produce and broadcast a radio programme – N17 – to coincide with Black History Month. N17 celebrates the extraordinary contribution made to British society by descendants of the Windrush Generation who settled and brought up their families in Tottenham.

Harris Academy Tottenham Sixth Form students, Chloe and Kane, conducted interviews online with members of the Windrush community who all come from Tottenham and have made a significant contribution to a wide range of areas:

The programme was originally intended as a 'live event', to coincide with the Windrush Festival 2020 in June. Because of COVID, however, the project was adapted to meet the needs of social distancing, and as a result a radio programme was produced and broadcast by Threads Radio in October 2020. After the first broadcast of N17 on October 2nd, the audience response was so positive that Threads Radio decided to broadcast the programme two more times during Black History Month.

N17 has been selected as Best Arts Project in the 2021 Hearts for the Arts Awards. The awards celebrate the unsung heroes of Local Authorities who are championing the arts against all odds.

Congratulations Kane, Chloe and all the team! 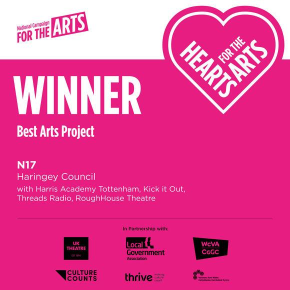 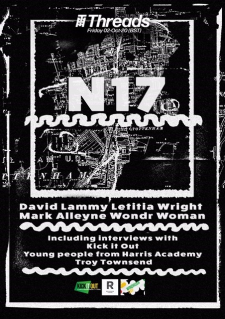