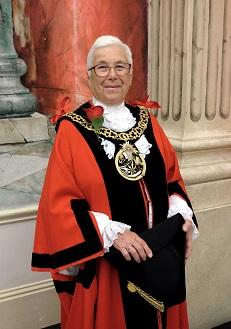 The Mayor of Haringey for 2019/2020 is Councillor Sheila Peacock.

About the Mayor of Haringey

The Mayor is the elected Chair of the Council and is the Civic and Ceremonial figure head for the Council.

The chain, badge and robes of office are an outward sign of this high office.

The Mayor is elected at the Annual Meeting of the Council for a period of one year.

The Mayor is by statute the first Citizen which is an honorary title and means that the Mayor takes precedence over everyone apart from a member of the Royal Family and the Lord Lieutenant of London. The Mayor must be non-political and represent every section of the community.

Apart from the Civic and Ceremonial duties and functions that the Mayor performs for the council, they also represent the borough at all major events and historical ceremonies in Haringey.

The Mayor has an important role to play in promoting the work of the council and supporting local community, voluntary and charitable organisations and in celebrating and recognising achievements and milestones.

When her youngest child started school, she enrolled as a mature student at the College of All Saints, White Hart Lane, to study to become a primary school teacher. After obtaining teaching qualifications, she taught at various Tottenham schools and in 1982 became a head teacher of a Tottenham school.

In 1994, Sheila was elected as a Labour ward councillor for Northumberland Park Ward, a position she still holds.

Sheila first served as Mayor of Haringey in 1998. Her special fund at that time was the Breast Cancer Department at the North Middlesex Hospital, for which she successfully raised over £29,000.

In 2004 Councillor Peacock was Mayor again and her special fund encouraged children to swim with the help of the Tottenham Borough swimming club.

Sheila has been Chair of the Tottenham and Wood Green Pensioner's Action Group since 1994, which has over 300 members, the largest pensioners group in London.

The Deputy Mayor of Haringey

Councillor Dana Carlin is the Deputy Mayor of Haringey.

You can contact the Mayor's Office in any of the following ways:

To invite the Mayor to a function

You can invite the Mayor to a function by completing the Mayoral Engagement form found on the Mayoral protocols and diary page.